Moving house is known to be in the top number of life stressors and I have had ample opportunities to confirm this.

The first few times I accepted it all philosophically (though not precisely calmly), but with each subsequent experience I became more disenchanted with the entire process, so that by the time we came to the move to Iswepe (where we would be living in our tenth home), I had reached the stage of considering relocation as being very high on my list of things to avoid.

From the word go, I was prejudiced against Iswepe.

Admittedly, seeing it for the first time in the middle of winter did not help.

It is a tiny little settlement between Ermelo and Piet Retief, lying just off the national highway, and is one of those places that you can pass without noticing if you blink.

The first thing that caught my attention when we turned off the highway was a general store painted the vilest shade of yellow (pretty much the same shade as my jaundiced eye).The dirt road was deeply rutted and the factory, where Barry was to be interviewed, and which we soon reached, was grubby and old-looking. The surrounding plantations of pine and wattle were dingy with dust. The small residential village, close to the factory, consisted of rows of aesthetically unappealing houses. 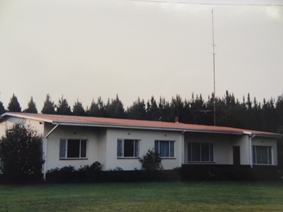 Note the lightning conductor. The area is notorious for lightning strikes.

The house we would occupy was one kilometre away from the village, down the dust-laden forestry road, and was situated on a small dam which lay still and brown and gleaming coldly in the winter sunshine.

Going into the house deepened my prejudice. Not only was it indeed cold, it was dark and gloomy too. The garden was huge – and I mean really, really big – and it was winter dead. There were simply no redeeming features that I could see at all.

Now, back home in Vaalpark (a residential suburb of Sasolburg in the Free State) was the first home we had ever owned (all the rest being company houses) and we had spent four years renovating and painting and decorating and turning it into the home of our dreams. It also had a garden (of manageable size) that was just beginning to show the results of loving attention.

An hour later, as we left this dump of a place – the word village is too picturesque to be apt – Barry informed me that the job fitted him like a glove. It was as though it had been designed for him – his specific skills and his specific experience. This was bad news.

My earnest prayers notwithstanding, Barry was offered the job before we even got home. (A pox on all cell phones!)

And so we (Barry, me and our daughter Natasha) moved, lock, stock and ... well, not quite the whole barrel. (It was a consolation that my parents came to live in our lovely home so that we could return to it eventually if we wished.)

While Iswepe and its immediate surrounds remained unappealing, my new home had undergone a transformation. Freshly painted and newly carpeted, the house was now bright, light and roomy, with ample cupboard space. It remained a cold house, but with an open fire place in the lounge and an extra coal stove in the kitchen, together with an unlimited supply of free wood, we were very snug in winter 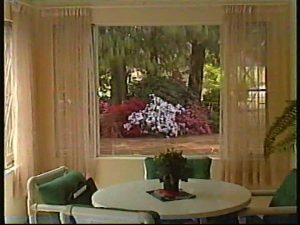 A view from the sunroom of some of the azaleas under the pine trees.

But the most magical transformation of all was the garden.

Every spring it literally blazed with glorious azaleas – magenta and pink and strawberry and apricot and white – blossoming under a grove of nine enormous pine trees and against the house.

Along the fence on one side of the property, a huge wisteria crept along, stretching tendrils up into the nearby trees and shrubs. For a few weeks in early spring the blue-lilac cloud rivalled the azaleas.

An early morning walk in the garden was like being in paradise. There were sweet and spicy scents and the mesh of the wire fence was always woven with gossamer webs sparkling with diamonds of dew.

On the right are the azaleas (sadly not in bloom) seen in the previous photo. The pine on the left is close to the house. Ahead is the main gate out of the yard. 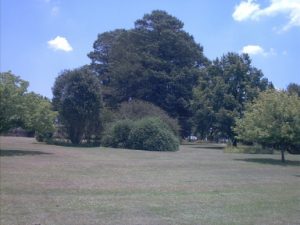 The tallest trees in the centre form the grove. This view is from the bottom of the garden looking towards the house behind the grove

Past the pine trees, the vast lawn stretched down to the dam. We eventually had a gate put in at the bottom of the garden to give us direct access to the dam and we acquired a two-seater canoe, spending many pleasant hours paddling across the quiet waters.

Yes, I admit it freely, the boundary lines had fallen in very pleasant places indeed.

When we first moved there we were almost completely surrounded by a pine plantation and could not be seen from the road. There were only two other houses on the dam, but they were far enough away from us not to spoil the illusion that we lived in solitary splendour in a forest clearing.

It was all quite delightful. 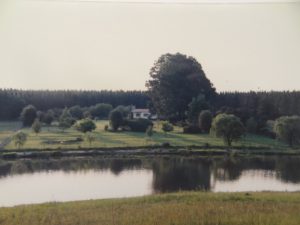 The ‘forest clearing’ – the grove of tall pines can be clearly seen.

We came down to earth with a bump.

Our standard French poodles, Purdey and Gambit (see Bathing the Boot), now ten years old, occupied the back part of the garden, which was completely fenced off from the front. Access between the two parts was gained by two gates, one on either side of the house. Owing to the state of undeclared war that existed between the poodles and the cats (now aged fourteen) the gates remained closed so the cats could use the front garden in peace.

The poodles’ kennels (yes, there were now two) were placed on the back stoep just outside the kitchen door.

One Sunday morning, soon after the move, Barry and I left early to attend our first church service in Piet Retief.

Natasha had remained behind and was still in bed when she heard an unusual and persistent scratching sound. She got up and walked down the passage towards the kitchen, trying to figure out where the sound was coming from.

The house had a very peculiar plan.

The kitchen, dining room and lounge each led off from separate sides of the square hallway. To the left of the door into the kitchen was a fancy glass-panelled door, which was clearly meant to be the main entrance. It opened onto a very small porch which led into the back yard!  To the left of the porch were the back bedroom and bathroom windows. Round the corner to the right was the kitchen stoep with the aforementioned kennels.

A very strange position for the main entrance, I’m sure you will agree!

The porch was closed off with a very secure safety gate – so seldom used (like never!) that we battled to open it. (We used either the backdoor out of the kitchen or the glass door which opened from the sunroom into the front yard.)

As Natasha came into the hallway, it seemed to her that the scratching sound was coming from the porch. She unlocked the glass-panelled door and opened it. Before she could step outside onto the porch, a young man flashed past her peripheral vision as he made a dash for the back fence.

The sound of his frantic getaway roused Grandma and Grandpa poodle from their geriatric slumber and, forgetting their advanced years, they leapt from their kennels and chased after the young man with surprising speed and agility.

Thoroughly incensed by the gall of this intruder, they made a most impressive effort to hunt him down, baying for his blood. (Let me just add here that Gambit had a deep Rottweilerish bark.) With one almighty leap, the prospective burglar cleared the fence and disappeared into the plantation, never to be seen again.

The poodles, fully refreshed by the unexpected exercise, pranced back to the house, wearing smug and self-satisfied expressions.

The only evidence left behind by the would-be burglar was a backpack containing an alarm clock and an expensive pair of binoculars (no doubt purloined during one of his more successful ventures), and the damaged putty around the unguarded central pane of the back bedroom window.

We had to face the fact that our isolation had some serious disadvantages.

We also had to face the fact that our elderly guardians were no longer to be relied upon. Yes, they chased him off with great success, but they had neither heard his approach nor had they reacted to the scratching, even though they were just around the corner.

And so we came to the momentous decision, the repercussions of which were to change our lives so dramatically.

We needed a large dog with serious teeth and we needed a small yappy dog to keep the large dog awake.

The days of our dogs – or is that dogs of our lives? – was about to begin in earnest.