Our second batch of poodles entered our lives towards the end of 1988, the year in which we had moved to Swaziland, where we lived in a little village called Mhlambanyati, which means, if memory serves correctly, where the antelope drinks.

We had fallen in love with the French poodle breed in the early years of our marriage when two miniature poodles joined the family. We were absolutely enchanted with their amazing intelligence (it is no coincidence that they are huge favourites in dog acts) and after meeting a standard poodle on a golf course in Nelspruit one day, we determined that our next dog would be a standard poodle.

Now this would have been all very well if we had been living in the midst of civilisation, but when you live in the bundu, poodles – especially standard poodles – provide you with a tremendous amount of extra work.

Poodles, you see, have this genetic mutation that prevents hair shedding. It means that they have to be groomed on a very regular basis. They are, in fact, rather like sheep, which have to be sheared. And if you are lax, either through disinclination or time constraints, you soon have perambulating and very smelly haystacks on your hands. Yes, poodle lovers, admit it – the natural odour of a poodle is not fragrant!

With naive confidence (sometimes ignorance is not bliss!) in our ability to handle the grooming ourselves (I mean, how hard could it actually be?), we bought two pups. Our intention had been to get a girl puppy only (bitch seems so harsh), but the breeder, obviously desperate to empty her house of puppies, offered Barry her brother as well, at a huge discount. (How could we resist?)

With the New Avengers still fresh in our memories, the two were named Purdey and Gambit. 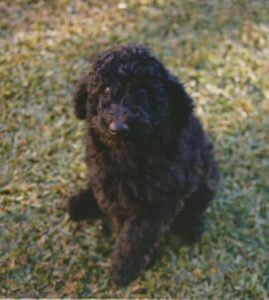 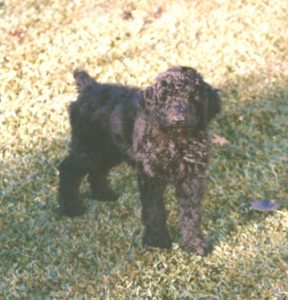 We had the most wonderful Swazi domestic worker named Lina, who adored these two dogs and they reciprocated with boundless enthusiasm. They would greet her ecstatically as she came in through the back gate, jumping up and showering her with kisses. She struggled with the pronunciation of their names and dubbed them Poody and Gumboot. My children, then pre-teens, found this enormously amusing. To the end of her days, Dieter called Purdey either Poody or Turdey, a name he came up with during his Beavis and Butthead phase. Gambit was more often than not referred to by the whole family as the Boot.

But let’s get back to the grooming.

We soon developed a system. I would bath them and comb them, and then Barry would shave them.

Now this sounds quite simple, and with Purdey it was. She became so accustomed to it that she would hop into the bath on her own. In fact, she seemed to thoroughly enjoy the massage and rinse.

But the Boot was another matter all together.

In the first place he was a huge dog (by poodle standards) and he had a luxuriously thick coat. And, even worse, he was totally allergic to the whole concept of bathing.

He knew very well what was coming, no matter how casually and nonchalantly I approached him. He would beat a hasty retreat to his kennel and refuse to come out.

All attempts to entice him out would fail and I had to summon help because getting him out of that kennel and into the house was NOT a one-man job. (Even less a one-woman job.) First he had to be bodily hauled out. Then we had to drag him down the very long passage to the bathroom. This would entail someone pushing from behind with someone in front pulling him along by his collar until we reached the bathroom door. Here the struggle reached titanic proportions as he dug into the carpet and refused to budge one inch further. Barry would then embrace him from behind and hoist him up. In desperation that dog would spread out all four legs stiffly so that they were wedged against the door frame. I would then grab his paws so that Barry could manoeuvre him into the bathroom where he finally heaved him into the bath. There he would stand, a picture of abject misery, while I tortured him with the shampoo and a stream of warm water from the shower hose. One of the kids – usually Tasha – would hold him to ensure that he remained in the bath and to enable me to wrap him in an old towel before he was able to give himself a good shake. Even with those precautions I would be drenched.

After the bathing came the combing – not as strenuous as the bathing, but very time consuming.

Then I turned them over to Barry, and with an electric razor, he spent much time and energy (and copious amounts of sweat) transforming them from shaggy sheep into elegant aristocrats. 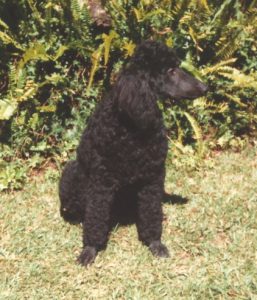 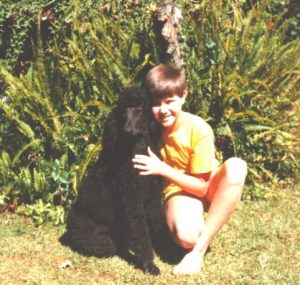 Gambit at 7 months with Dieter (12)
to give you an idea of how big he was.

Ideally, the grooming should be done every six weeks, but I don’t think you will be too surprised to learn that there were times when ten weeks would go by before I was able to summon up enough oomph (and courage!) to go through the process yet again. Hence my familiarity with the smelly haystack syndrome.

By the time we returned to urban life in South Africa, we had been doing it for so long and it was such a part of our routine, we did not even consider making use of a professional service. (Even if we had, I think the cost would have put us off. Grooming two large poodles does not come cheap!) 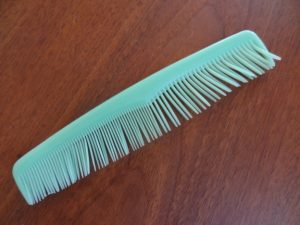 However, I have kept the comb I used throughout the years (I still use it personally) as a reminder to me NEVER to own a poodle again. I tell you, after twelve years, the iron enters your soul.

Create your own review
BATHING THE BOOT
Average rating:   0 reviews