(If you have read Bathing the Boot you will know about Purdey and Gambit, the standard French poodle pups who joined our family.)

It was only when we took the pups to the vet for the first time (to get their second vaccinations) that we heard about littermate syndrome.

In a nutshell, the vet explained, this means that getting two pups from the same litter is a bad idea. (Now this info helps a fat lot when you have already got them and fallen in love with them!)

I have recently done some research on the Internet and it seems there are two ways in which littermate syndrome manifests itself.

The siblings could be so bonded with each other that they take their cues from each other and pay very little attention to the human trying to train them or interact with them.

One or both could also suffer from severe separation anxiety whenever they are parted, making it very difficult to train them separately.

Even worse is the second risk, and that is of aggressive behaviour. If you end up with two dominant dogs, the chances of their fighting over food and toys become that much greater. If one is dominant and the other submissive, there is also the risk of bullying.

However, it appears that while it is a risk, it is by no means a foregone conclusion. Anecdotal experiences related on the various websites suggest that while many dog owners have had exactly the problems mentioned, there are others who consider this information to be total hogwash.

For us, though, the internet was still way in the future, so we had no information readily available and we had to learn about it from our own experiences.

The conclusion I have reached is that the situation requires knowledge, time and patience to solve or prevent the potential problems. Personally, I would not willingly get two littermates again.

In our case, we did not have any of the problems arising from over-attachment. We also struck it lucky in that they were both fairly easy-going dogs, so there was no major aggression, but they certainly had their moments.

Occasionally we would hear persistent growling from outside and on investigation would find them down on the ground, nose to nose, teeth bared and lips fluttering as they dared each other to pick up the tennis ball or the stick or the bone. We used to refer to it as the playing of the “Guardian-of-the-Bone” game. 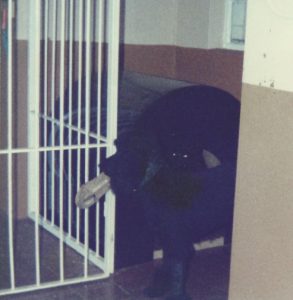 The kennel facing the kitchen door.
Purdey inside, Gambit in front with his shoe.

And every now and again pandemonium would break loose inside the kennel, which was placed in a sheltered corner of the back stoep. The kennel would literally bounce around banging explosively against the walls of the house as the two of them climbed into each other with such ferocity that we would be convinced they were killing each other.

The first time it happened we flew out of the house, expecting to find at least one corpse. As we came through the kitchen door, they bounded out of the kennel to greet us with great exuberance, none the worse for wear. A careful inspection of each revealed no injuries that we could see, so whether it was all just noise, or whether their coats protected them, is anyone’s guess.

Eventually we learnt to ignore them, merely rolling our eyes towards the ceiling and having a quick check that all was well.

When they were much older we finally had the sense to get a second kennel, which put an end to these incidents.

Taking them for their regular run also brought out their competitive spirit.

Mhlambanyati had a lovely nine-hole golf course which provided an ideal place to exercise them.

With joyful excitement they would hop into the boot of the car for the short drive to the golf course. The moment the car stopped the excitement in the boot would escalate and when the boot was opened they would surge out to race for the gate.

This being narrow, there would be a terrific argument with much snapping and snarling as they squashed through it together.

(Like most French poodles they were highly trainable and we had taught them to sit, to lie, to shake hands and various other tricks. We really should have taught them to wait calmly as well, but at that time we had no idea how important it was for dogs to be kept calm, and that so many behavioural problems have their source in over-excitement.)

But once they were on the actual golf course they hared off in different directions and, my goodness, they did enjoy their run!

It was on the golf course that we discovered the Boot’s unusual talent.

Although Purdey was spayed at six months, out of sheer ignorance and misinformation, we did not realise the importance of neutering a male dog. Gambit, therefore, had one abiding interest and that was to mark his territory.

While Purdey followed her nose in search of rabbit holes and other interesting signs of animal habitation, the Boot criss-crossed the fairways going from tree to bush, and from bush to tree. He would carefully sniff at each one to find the exact right spot and then he would raise a leg and skilfully squirt just a few drops against it. When his bladder ran dry, he would put aside his quest and chase off after Purdey to join the hunting expedition. (They never caught anything, but they had a marvellous time trying.)

Then one day, when he was doing the usual, and his bladder no longer provided the necessary, he backed up onto a particular tree and kept backing up against it until his hind legs were well up the tree and he was standing on his forelegs only.

What was that dumb dog trying to do?

And then he pooped! Up the tree!

(How I regret that I never took a camera with me to record this unique procedure!)

This became his modus operandi. From that day forward, when his bladder no longer enabled him to mark his trees, he made use of his bowels, always climbing backwards up against the tree.

So, although Purdey was the brighter of the two, when it came to bizarre behaviour, he left her in the dust!