(If you have read the previous entries, you will know that Purdey and Gambit were standard French poodles.)

Wanderlust is another very good reason for neutering male dogs. I am fairly sure that if we had done so, Purdey and Gambit would not have developed into expert escape artists. 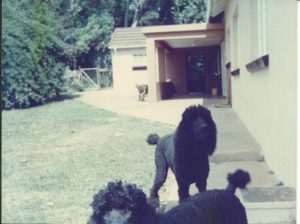 In the background escape route one - the gate which I saw Gambit (behind) opening.

It was only after they had absconded out of the back yard the second or third time, that I saw Gambit in action standing up on his hind legs to lift the wire loop which secured the gate to the post. (Purdey was not tall enough to reach it.) Previously I had thought it was Lina, our domestic worker, or the gardener who had left one of the back garden gates open.

After this we found more secure methods of closing the gates, but during the six years of their lives in Mhlambanyati, they still managed a number of opportunistic getaways.

They would be gone all day and would come back, covered in burrs and blackjacks, and my trusty comb would take a further battering.(See Bathing the Boot.)

And only someone who has sat and combed burrs and blackjacks out of poodles’ coats for two hours or more would be able to empathise.

On one occasion, Doris, our gardener, carelessly left a gate open and they were off, returning in their usual burred state but with the satisfied expressions of two dogs which have had a rip-roaring time.

This occurred so soon after a previous escapade that I decided to let Doris do the combing as a salutary lesson to secure the blasted gates! Needless to say, she was extremely careful after that. 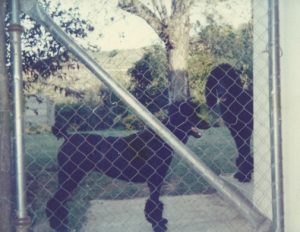 On another occasion when they managed to sneak out, they were gone for two days, and when they returned the pads on their feet were worn and bleeding and they were stiff for several days – almost as if they had developed severe arthritis overnight. This was quite worrying, but there was a daily improvement so we did not have to make the trip to the vet in Mbabane.

Where they had been, goodness alone knew. We wondered if they had gone on a journey to Mozambique!
The alarming aspect of these incidents was that this part of Swaziland consists almost entirely of pine plantations, and snares are set everywhere to catch small buck, the meat being highly prized by the Swazis.

One day our worst fears were realised.

While we were on holiday, leaving the two in the loving care of Lina, they managed to get out.

Lina said she could hear them barking up on the hill behind the house, but was not too concerned as up until then they had always returned. Eventually Purdey did come back, but without Gambit. She came towards Lina, barking and repeatedly turning back to the gate out of the yard. She kept this up until Lina followed her. She led her up the hill and there was Gambit, one paw caught in a snare, and it had already ballooned ominously. Lina ran back to her quarters to fetch a knife and then raced back to free him. Mercifully, she was in time, the swelling went down, and by the time we returned home, there was no trace of any injury.

This made us more vigilant than ever.

However, in the year before we left Swaziland, they escaped yet again, and this time it was Gambit who returned without Purdey. Our immediate conclusion was that she had been snared. We searched in all the surrounding forests with no success. Anyone who has lived in a similar area will know that searching for a needle in a haystack is a doddle compared with searching for a trapped dog in thousands of acres of trees. 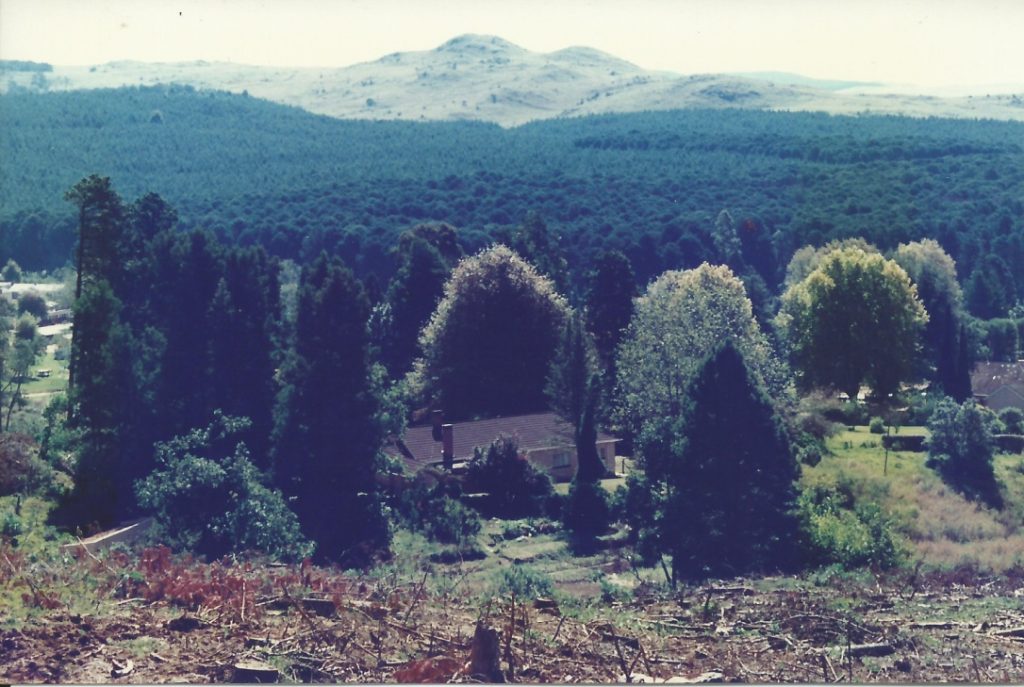 A view of our house from the hill behind. The surrounding forests can be clearly seen.

We took Gambit with us in the hopes that he would lead us to Purdey in the same way that Purdey had led Lina to him, but he had only one interest.

Yes, you guessed it!

So many trees! So little time!

While we whistled and shouted ourselves hoarse, all the while encouraging Gambit with constant repetitions of: “Where’s Purdey?” that useless moron, who, to all appearances, had never heard of Purdey and had no clue who she was, was wringing out his kidneys to produce an invisible drop for each tree. I came to the conclusion that his brain was between his legs!

We eventually returned home, disconsolate. And with not too much charitable feeling towards that bonehead either, I might add!

Winter was fast approaching and it was getting cold at night. We slept badly, worrying about her, and desperate prayers for her safety were constantly being sent heavenwards. During the day we continued searching the forests. After the third night of disturbed sleep we came to the conclusion that we would probably never see her again.

It was dreadful. To lose a pet is always heart-breaking, but when you are not sure whether they are still alive and possibly suffering painfully, or whether they are slowly starving or freezing to death, then your sorrow takes on an added dimension. There is also no proper closure and it extends the grieving process, sometimes interminably.

That afternoon of the fourth day, I was in my bedroom sitting on the edge of my bed when Barry came down the passage.

“Coll, look who’s here,” he said, and an exhausted Purdey came into our bedroom with him.

I tell you, I fell on that dog with joy and such relief!

She was scarcely able to wag her tail, she was so weary. Around her neck was the wire noose, which had been cut off from the rest of the snare. There was no injury to her neck, so the intelligent dog had obviously had the sense to sit (or stand) absolutely still while trapped.

I’m sure her sweet, unaggressive nature also saved her. She probably hailed the poacher as a saviour, wagging her tail in welcome and licking his hand in gratitude for freeing her! I doubt very much whether she would have been freed if the poacher had thought he might be (deservedly) bitten for his pains.

That turned out to be the last escape while we were still in Swaziland.

In fact, it was their Grand Finale. They never escaped again