Birds fascinated me from an early age.

They first came to my attention when I noticed my mom observing the Cape robins and the olive thrushes in our garden in Virginia (on the Free State Goldfields) with a pair of binoculars, and with Robert's Birds of Southern Africa at hand. Then my dad, inspired by my well-meaning but misguided paternal grandmother, built a large aviary in our back garden and stocked it with wild birds.

Not for long though. We went on holiday and returned to find that the aviary had been opened (probably by the hellions next door) and the birds were gone. Although they did the birds a favour, believe me, they were not motivated by compassion. (They really were awful neighbours.)

But spending much fascinated time inside the aviary had done its work and, to this day, I remain avidly interested in the local birdlife, wherever I happen to be.

Moving to Ngodwana from the Highveld introduced me to the birds of the Lowveld. Strictly speaking Ngodwana is on the Great Escarpment, but the Crocodile and Eland Rivers allow the birds to penetrate further inland than one would expect. 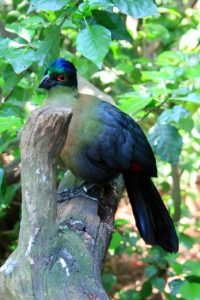 The purple crested lourie.
Image from the public domain. 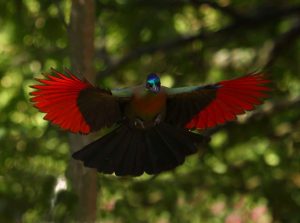 The lourie in flight – beautiful! Image from the public domain.

To my never-ending delight, they came to gorge themselves on the fruit of the wild fig tree in our garden, so I had ample opportunity to observe them. 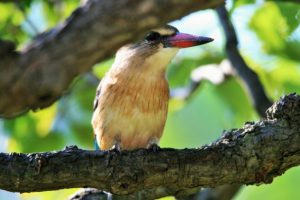 But my story involves a less brilliant, though no less exotic, bird of the Lowveld – the brown-hooded kingfisher.

This rather plain bird is only half the size of the lourie, and excepting for the blue tail and blue wing quills is a rather drab brown. But it does have a wicked red beak, which, as with all kingfishers, is disproportionately large.

I was standing at my open kitchen door one Monday morning, when I noticed the kingfisher perched on the telephone wire which spanned our back garden. It sat absolutely motionless and appeared to be watching something with great concentration.

A turtledove was scratching in the soil and on the grass, going about in a random and absent-minded fashion, as turtledoves do. But, although kingfishers have been known to eat mice and very small birds, I was pretty sure that turtledoves are not on their menu. What was that kingfisher watching?

A slight movement caught my peripheral vision and I saw that Ginger, our calico cat, was below the fully laden rotating washing pole to my right. Using the week’s laundry as cover, she had flattened herself on the grass and was watching the dove with a hungry eye, waiting patiently for it to come closer. The tip of her tail twitched ever so slightly.

The turtledove remained oblivious to the danger and came gradually closer.

Then, just as Ginger came slightly forward and gathered herself together to launch her final assault, that kingfisher swooped down from the wire, dealt Ginger a stunning blow on the top of her skull, and flew off!

Never before had I seen – nor have I ever seen since - a bird doing guard duty!

Ginger did not know what had hit her. She looked wildly to the left and the right, her eyes wide and her ears flattened backwards against her head, and then she made a dash for the back door and the safety of the house. And there she stayed for the rest of the day.

It didn’t stop her from stalking birds though, and once the episode had faded from her mind, she rejoined Katy in keeping the turtledove population under control.

We were living in Iswepe, also on the Great Escarpment but much further south, so there was no proximity to the Lowveld. But our house was situated on a dam in a very rural area, and the birdlife was prolific.

In the nine years of our stay in Iswepe, I identified seventy-four species. (I am not a serious bird watcher, though. My interest, while keen, is opportunistic. I might walk through my garden with binoculars, but I do not go in search of the elusive bird to tick it off on my life list.) On the dam itself, the most exciting sighting I had was of a purple heron. I have never seen one anywhere else. In my garden I also had my first and only sightings of a Karroo prinia and a golden-breasted bunting. 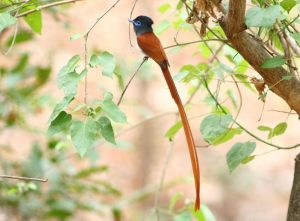 From the public domain.
A male paradise flycatcher. The female does not have the long tail feathers.

My favourite bird was definitely the paradise flycatcher. It did not nest in our garden – not that I know of – but it came to feed off the insects to be found during the flowering season of a kind of privet (I think) which grew against the back of the house. One of the kitchen windows gave me an unimpeded view. This exquisite, tiny bird, with a dark blue crested head and breast, and with a chestnut back and very long chestnut tail feathers, flew tirelessly from the tree to the trailer parked below the window, where it rested for a few seconds to swallow its catch before returning to the tree. I am sure it consumed its own weight in flies every day!

And, of course, there were plenty of turtledoves.

Turtledove fledglings leave the nest a few days before they can properly fly, and, over the years, our dogs caught many of them. There was one pair of doves which always nested in a small tree near the house and I wonder if they ever managed to send a fully fledged progeny into the world while we were in residence. 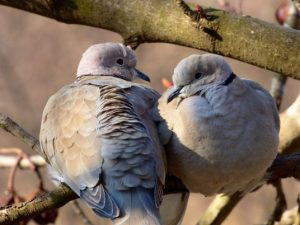 A pair of turtle doves.
Image from the public domain.

We were aware that you shouldn’t ‘rescue’ fledgling turtledoves which you find on the ground as the parents continue to feed them until they can fly, but on one occasion we broke this unwritten rule.

The fledgling seemed younger than usual, still having a fair amount of down, and it was definitely nowhere near being able to fly. It was hiding under the azaleas growing next to the house, and it was only a matter of time before one of the dogs found it. There were no parent doves to be seen and so we took it in.

It’s probably just as well we didn’t know what we were letting ourselves in for.

Our sunroom became the temporary nursery as it was the only room in the house that was not carpeted. However, we still spread newspapers over the floor to contain the mess (which turned out to be far worse than I had thought possible).

We had it for about three weeks.

For the first week we fed it baby cereal, and within a few days it was managing quite well to feed itself from a flat dish on the floor. But, my goodness, what a sloppy eater! The feathers on its face were soon crusted with the cereal and we began to refer to it as Porridge-Face.

After that we spread seeds over the newspapers to encourage it to start foraging for its own food. It soon caught on and the mess increased.

One morning Ginger – now an ancient old lady of twenty years – came through the open door into the sunroom, from which she had been banished since the advent of Porridge-Face, and espied this cheeky interloper.

She crouched down and watched it intently. We waited with bated breath, ready to intervene if necessary. It had been years since she had caught any birds and we thought she was past it, but one never knew.

Then she noticed the bowl of cereal. She looked at the bird again. Then she turned her gaze back onto the bowl. It was obvious that this was quite a dilemma.

After a few minutes of serious cogitation – you could almost hear the cogs of the senile machinery creaking – she turned her back on the bird and settled down to enjoy the cereal!

Porridge-Face learnt to fly there in the sunroom and perched up on the curtain rails when it wasn’t scratching for seeds, with disastrous consequences to the curtains. When we felt it was flying well enough we took it outside for a flying lesson. This went well and when it landed back on the grass we took it back inside.

The next morning it had its second lesson, which ended with us having to get a ladder to haul it out of one of the pine trees! It had perched on one of the lower branches, to our relief, as we were not yet confident that it would survive on its own without any parental supervision.

Early that afternoon we decided on a third lesson.

Tasha launched it off her arm where it was perched. It flew up into the air, saw a group of turtledoves sitting on the fence and immediately flew off to join them, without so much as a backward glance. The next second they all flew off together and that was the last we saw of Porridge-Face!

With great relief I cleared away the newspapers, swept and scrubbed the floor and washed the curtains.

For months afterwards we examined the turtledoves in our garden and wondered if one of them could be Porridge-Face, but we were never able to tell.