Enter Wolf (ever after known as Wolfie ), an eight-week-old Rottweiler puppy, heavily infested with fleas (only noticed on trip home) and very car sick (four-hour journey from Pietermaritzburg to Iswepe rendered rather less than tranquil).

Poodles are not impressed. Purdey loftily ignores the little interloper but Gambit is determined to establish the pecking order at once. Hair-raising moment, but all is well. Wolfie understands submission perfectly. Thereafter poodles pay no further attention.

Enter Schnudl (pronounced shnoodle but often referred to as Schnudie), a six-week-old miniature dachshund puppy, without fleas but with an impressive bladder, which she empties on my lap on the trip home (mercifully only twenty minutes) from Piet Retief.

Wolfie and Schnudie take to each other immediately. Schnudie is lively, playful and aggressive. Wolfie is gentle and affectionate. Schnudie establishes her position within seconds of meeting her new playmate. They chase each other endlessly, and when tired of chasing they wrestle, Wolfie mostly on his back while Schnudie grabs whatever part of him she can, all the while growling ferociously.

The puppy racket attracts the poodles and they come to peer into the kitchen over the lower half of the stable door. Both are very interested indeed.

Gambit’s reaction to Wolfie is fresh in mind. We let them meet outside, with the poodles on one side of the gate separating the back and front gardens, and the pups on the other.

Poodles are both nose down to the bottom of the gate to get to the new puppy. The puppies grovel submissively and creep to the gate on their stomachs. Gambit’s body language is not friendly at all. Purdey’s is. We let Purdey through.

A few days later we take the pups to the back.

But the ferocious growling has convinced Gambit that this insolent little upstart needs to be put firmly in her place. Before we can stop him, he lunges at the puppy and nicks her ear, drawing blood. We cut the meeting short. Immediately.

For the time being, only Purdey is allowed to accompany the pups on walkabouts in front. Gambit is banned to the backyard where he stares with basilisk eyes through the wire mesh at the puppy shenanigans on the other side of the gate.

Two weeks later, Gambit is off his food. He is listless and stays in his kennel. It is the weekend. By Monday there is no improvement, in fact, he seems worse, so we take him to the vet in Piet Retief. The vet is not sure what it is, so Gambit stays in hospital for observation and treatment, but daily phone calls reveal no improvement at all.

On Thursday morning I receive a phone call. Gambit has died during the night.

Dry-eyed I go through to Piet Retief. I sit in the waiting room waiting my turn to see the vet to hear the why’s and the wherefore’s. The shock wears off and reality sinks in. My dog is dead. The Boot has gone. Tears begin to flow. I cannot stop them. I use up most of my supply of tissues. The vet comes through to the waiting room. It is still not my turn, but he takes one look at me and ushers me into an empty consulting room and leaves me to indulge my grief in private.

Gambit has died of massive organ failure, accelerated by his illness which is possibly distemper – the vet is not sure. (The poodles have not been inoculated for a number of years.) (Note to self:  When moving to a new place, especially if it’s a rural area, take your dogs for their vaccinations before you go.)

The vet takes me outside. On the paving behind the clinic lie the mortal remains of my dog. The vet tactfully leaves me alone. I sit and stroke the cold, stiff body with the matted coat. He and Purdey were due to be groomed that week. 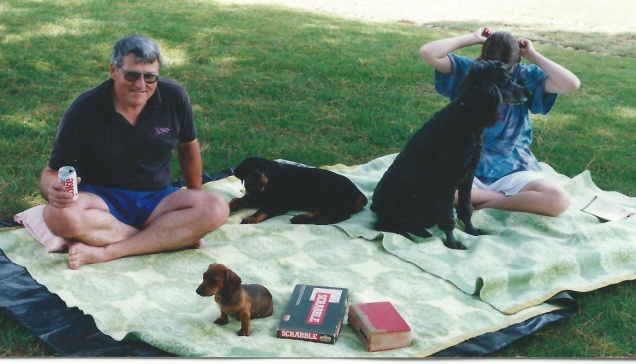 A Sunday afternoon without Gambit.