Two dogs do not constitute a pack, and thus it was, just a month after the tragic loss of Lulu, that we decided it would have to be re-established. Barry’s retirement age was coming closer and it seemed quite likely that we would be in Iswepe until then. This meant that we still had a number of years of isolated living ahead of us and we needed the protection. So, while on holiday in Margate, we began the search in earnest.

We found the daxie first.

We were lucky enough to be first in line, so we got our pick of the litter. It turned out to be a no-brainer. The runt was an adorable little thing, super playful and full of mischief. If she wasn’t on her back, waggling her paws, then she was rolling onto her siblings and gently gnawing their ears or their paws, constantly inviting them to play.

She hadn’t been inoculated so we immediately took her to a local vet, who found it hard to believe that she was six weeks old, she was so tiny. Her teeth were tiny too, and needle-sharp. They soon earned her the name of Attila the Hun. The name stuck and within days became Tilly. 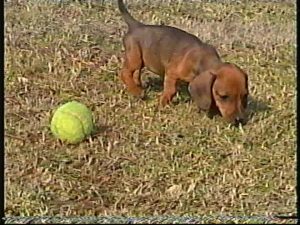 Tilly at about 10 weeks old

We bought a provincial newspaper and consulted the Classifieds in our search for a Rottie and struck it lucky. Just a few days later Barry and I took the 90 minute trip through to Pietermaritzburg to see them.

They were absolutely gorgeous! The breeder was very helpful and put all the males away and left us with the five little females. When I explained that the last thing we needed was an aggressive or dominant pup, she fetched a meaty bone from her fridge and put it down amongst the remaining pups.

In a flash three of them fell onto the bone, growling and snapping. The other two stood back. Barry and I picked them up while the breeder ushered the others back into the house.

It would have been easier if there had been only one though, but eventually I made my choice based on the tiny little white fleck she had on her chest because it reminded me of White Spot. (See Pick a Pup.)The breeder agreed to keep her until the end of our holiday, and Tasha and I collected her two weeks later on our way home to Iswepe.

She spent the trip on Tasha’s lap while Tilly lay on mine. They lay nose to nose, silently staring into each other’s eyes, almost drinking each other in. By the time we arrived home, they were firm friends.

Choosing a name for our latest Rottie turned out to be our biggest problem.  Never have we struggled to find a name as we did with this little dog. She was an absolute angel and incredibly well-behaved and obedient from the word go, with none of the passive resistance for which Rotties are so well-known. But, somehow, calling a dog “Angel” just did not work.

I liked the name Maya. Barry and Tasha did not and they were quite insulting about it. (What is wrong with Maya, I ask you!)

Tasha wanted Tinkerbell, shortened to Tinky. Barry and I were horrified. (I mean, really! Tinky! Tasha could not understand our antipathy.)

(Tasha insists that I am making this up. [I’m not.] If not, then she blames the fibromyalgia for addling her brain. She wants me to strike it from the record, but, unfortunately for her reputation, I have to abide by the strict protocols of ethical journalism.)

Barry wanted Trixie. Tasha and I snorted in disgust. (Trixie!! Every single dog we’ve ever had he wanted to name Trixie. Clearly something traumatic from his childhood.)

And so the argument went back and forth, each one sticking to his or her guns. With no consensus being reached, we eventually had to compromise. 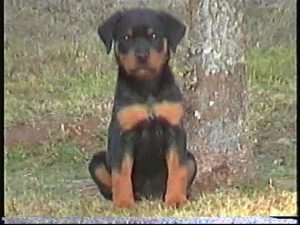 Poppy at about 9 weeks old

We decided to go with a flower because of her flower-like countenance. She really was a lovely dog, with the most beautiful markings I have ever seen on a Rottweiler. The tan on her chest formed a perfect bow.

We settled on Poppy, and as we had until then been calling her “Puppy”, she had no problem responding to her name.

Occasionally we referred to her as Princess Poppy because of her regal air, but most often she was Pops, Popples or Poppalops. Yes, I know. We are nuts.

Wolf and Tess were, quite predictably, outraged at first, but our choice of submissive pups worked as well as we had hoped.

After a few days, we brought Tess to the front to meet them. By this time she was eager to get to them but we took the precaution of keeping her on leash with a choke chain. The pups grovelled ingratiatingly and urinated copiously. All went well.

A few days later we brought Wolfie out with Tess, but he was not in the least interested in them and growled grumpily when they approached him.

We had discovered after the tragic pig incident (see The Hunters) that Wolfie was a victim of indiscriminate backyard breeding. He had walked with a slight limp in his right foreleg on and off from the age of twelve months, but we had always thought he was just forever hurting himself in one of his mad dashes round the yard. After the pig debacle, however, he limped severely and it just did not get better. The vet took x- rays which he sent away to be examined by veterinary experts. The diagnosis was that besides having severe arthritis in his right hip, he also had right elbow dysplasia. This explained the limp he had had for so many years. The operation to correct this was way, way beyond what we could afford at that stage, so he was put onto cortisone.

At that stage he was only five years old and we spent the rest of his life managing his condition. (And by becoming a backyard breeder myself, I had inadvertently helped to pass on the problem. Wolfie should never have been allowed to breed.)

As he still enjoyed going for walks, though much shorter than previously, and lived for his strolls in the garden in pursuit of The Hand (see Shadow Chaser), and as he still patrolled the fence to chase off all possible intruders (with no signs of incapacitating pain, I might add), it seemed that his pain was not unbearable, but it probably made him more irritable than he might otherwise have been.

But the pups understood dog-speak very well, and backed away smartly.

When we had had them for three weeks we started walking all of them together as a pack twice daily, sometimes just around the huge garden, and sometimes along the forestry roads. Gradually they spent more time together and by the time the pups were three months old they could be left safely together for short periods without supervision.

For the most part Wolfie continued to ignore them. He accepted their loving kisses with a grumpy growl or with lofty disdain, depending on his mood.

Tess tolerated them most benignly, patiently allowing them to jump all over her.

She had been very lonely without Lulu, as she had never really bonded with Wolfie, and the disappearance of Lulu from her life had left her quite bewildered for a while. It had added to my heartbreak to see Tess looking for her during those first few days after Lulu’s death.

Now, as Poppy gained confidence, she began to invite Tess to play with her and soon Tess was chasing and being chased, quite forgetting that she was a staid five years old! It gave her a whole new lease on life. 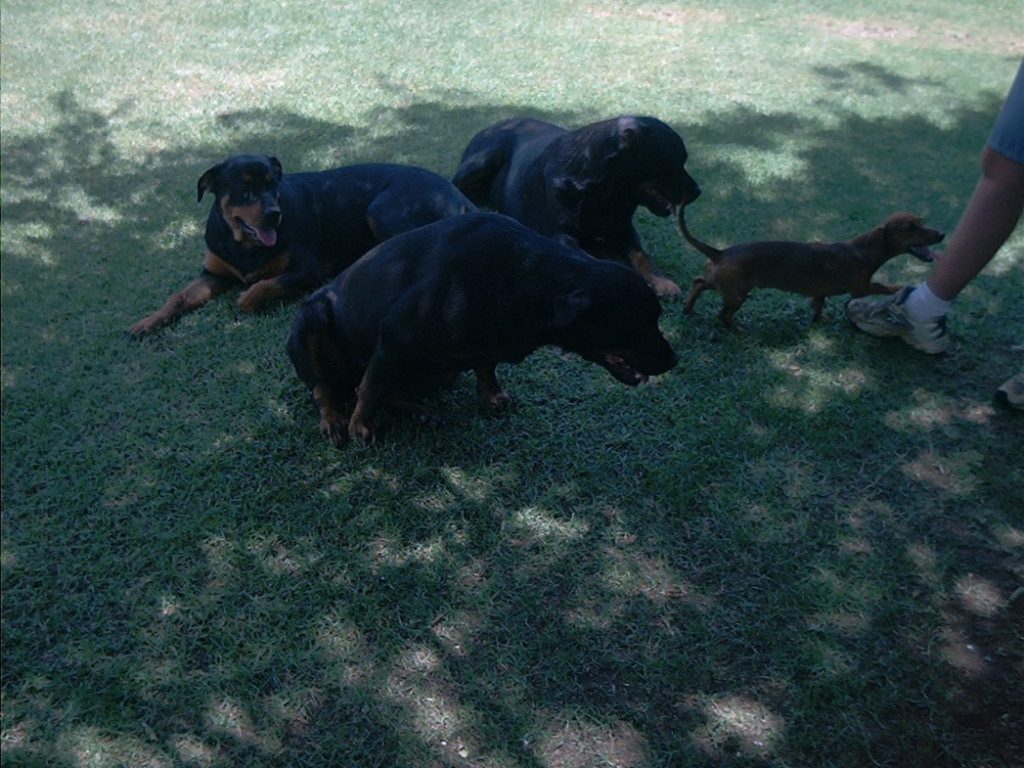 The pack – Wolfie in front watching out for The Hand.

When the pups were about six months old we almost had a tragedy.

I reversed out of our garage, as usual turning to the right opposite the kitchen. This then enabled me to drive forwards to the gate which was on the left. Putting the car into first gear, and releasing the clutch, I drove slowly forward. There was a sudden thump as I went over an unseen obstacle. Tasha was waiting at the gate and she fell down onto her knees, screaming frantically and gesticulating wildly. “Go back! Go back!”

I went cold, convinced I had driven over one of the pups. I did not want to reverse as this would surely kill whoever it was, if she wasn’t already dead! I hurriedly wound down the window.

I reversed and Wolfie scrambled out from under the car and went haring off at top speed through the gate all the way down to the middle of the front garden, his ears flat against his head. Tasha ran after him, desperately calling him. Finally he stopped and slowly turned his head, staring over his shoulder with enormous eyes filled with horror.

Tasha, crying in her distress, petted him and stroked him and comforted him while trying to ascertain if he was injured or not. He barely noticed her, continuing to stare at the Polo with huge and rounded eyes.

The poor dog had obviously chosen to lie down just where I was unable to see him, and his stiff and sore joints made him reluctant to get up without good reason.

He seemed to be uninjured, but we immediately rushed him through to the vet in Piet Retief, just to be sure. But other than a few scrapes on his back and a bruised left hind leg, he was okay. With the weakness he already had in both right legs, he had difficulty walking for a few days, but he recovered fairly quickly.

We could not help laughing at his subsequent attitude towards the Polo though.

The first few times when it was reversed out of the garage, irrespective of who was driving, he leaped up and stood way, way back, trembling violently with fear. After a few weeks, he simply retired to his kennel the moment the garage was opened and remained there until the Polo had gone off. Yet, when the Jetta was reversed out (it was a double garage), he did not react at all.

Strangely, he also did not mind when the Polo came home and was driven into the garage.

It seemed as though Wolfie saw the Polo as a very fierce beast which would come out of its den with a voracious appetite. When it returned it had obviously hunted successfully somewhere and was no longer hungry. It just wanted to get into its den to sleep and was therefore quite harmless.

Poor Woofles! We felt mean laughing at him, but the sight of him standing halfway to the dam with flattened ears and those huge, bulging eyes looking at us over his shoulder will be forever etched on my and Tasha’s memories.