At first they totter around on uncertain legs, but as they begin to gain strength and skill, they lumber around like little black and tan teddy bears, providing endless amusement as they interact with one another and begin to explore their world.

And it was totally fascinating how each one developed its own personality so that we eventually were able to recognise them without having to examine the dots of paint on their little hindquarters. It did not take long before we began to refer to them according to some of these distinguishing characteristics.

Top Puppy was Little Lotta, so named because she had been the biggest and greediest of them all. Interestingly enough, the larger boys soon outgrew her (as indeed some of the girls eventually did too).

The three biggest boys soon became Paws, Jaws and Claws for obvious reasons. Paws and Jaws were contenders for Top Puppy, with Jaws being particularly aggressive. Lotta had to withstand many a challenge for the supreme spot but she managed to hold her own.

Her dominant, no-nonsense attitude appealed to Barry and he decided she was the one he wanted us to keep.

Unlike his bigger brothers, Claws was a very sociable little fellow, and he got along with everyone.

The two girls who had been only slightly smaller than Lotta at birth were the ones who outgrew her. The larger of these two had a tiny fleck of white fur on her chest, so quite naturally became White Spot. She was also one of the dominant puppies but was very responsive to human contact. She was the first of the pups to seek me out for attention and not just for food. Not surprisingly, she was the one I wanted us to keep.

The third little girl was soon known as Bear because of her thick neck and lumbering gait. She was very calm and easy-going, as responsive to human contact as White Spot, just loving to be cuddled. Tasha decided that this was the one we should keep.

Do you, by any chance, see a bit of strife looming on the distant horizon?

Girl number four was completely different from the other puppies.

She was a loner, tending to ignore the others and perfectly happy to wander off on her own to a secluded spot where she could quietly pursue her own interests without interruption. She was the one we found hardest to name and we continued to refer to her as Lilac One, according to her paint dots, until we noticed that she had a dark muzzle and a very dark mouth. Thereafter she was known as Lilac Black Lips.

Boy number four, who was not much smaller than Claws, was also a very sociable little guy who got on with everyone. We were able to distinguish him from Claws, especially after mealtimes, because he was a greedy little pig who became positively rotund after every meal. His bloated body, with each leg seeming to protrude from him at right angles, would barely be able to trundle across the grass. This was Turtle.

This left the three smallest members of the litter.

The largest of the three got her name the first time we bathed the puppies.

Because it was by now autumn, and thanks to February’s deluge, it was cooler than usual, so I dried them all with my hairdryer. They did not enjoy this procedure at all, and were clearly relieved when it was all over. All excepting for one. With head regally lifted, she sat completely still, her eyes closed in bliss as the warm air blew over her, for all the world like a princess being served by a slave.

Princess was, in fact, the best looking of all eleven of them, and if she hadn’t been so very fluffy she would have been my choice to keep as she was also sweet and affectionate. I am afraid that the thought of grooming that thick coat put me off. (Don’t forget I was still contending with a poodle at that stage.)

Fairy was a pretty and dainty little dog, submissive and as sweet and affectionate as Princess.

We come now to Sleepy Jem, the runt of the litter.

Of all the boys, I liked him best. He was as friendly and easy-going as Claws and Turtle, but, thanks perhaps to the fact that he was the runt, he was also very gentle. His name had evolved into Little Gem, because that is what he was. If we had been intending to keep a male, he would definitely have been my choice.

We all agreed, however, (what with Wolfie being an unneutered male) it would have to be one of the girls.

Barry continued to hold out for Lotta because of her bold and adventurous spirit. She was definitely off my list, though. (Another aggressive bitch to add to the Schnudl versus Lulu mix? I don’t think so! It was also not long before she was making spirited attempts to yank my washing off the line. So it was a double I don’t think so!!) Tasha hung onto Bear for dear life, while I see-sawed between White Spot and Princess.

Eventually we decided that we would let Schnudie choose.

At this stage Schnudie was still in Vaalpark, where she had had the inconsideration to come on heat. This was daunting news, to say the least. Horror-stricken at the thought of yet more puppies, I begged my mom to keep Schnudl away from Rambo at all costs, even if she spent the three weeks incarcerated in the garage! However, after a few days of contemplation, having been assured that miniature dachshunds very seldom produce more than six puppies, I took pity on my mom and on Schnudie. I resigned myself to the workings of fate and gave my gracious permission for nature to take its course. (Silly me.) 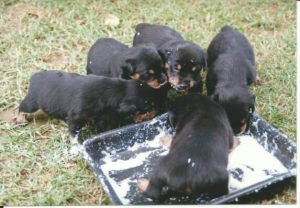 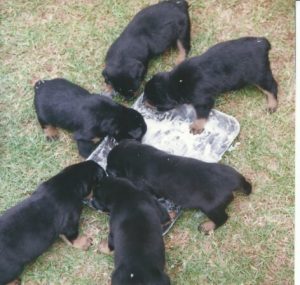 We came at last to the process of weaning the pups and soon feeding times became so much easier and I was able to put the baby bottles away.

But my relief was premature.

I was abruptly brought face to face with the fact that, adorable or not, eleven weaned puppies create an unholy mess.

The pen is moved from the kitchen to a storeroom where they sleep at night.

To contain the mess, I spread newspapers over the entire floor.

At dawn (while I am still abed, sleeping the sleep of the exhausted), the furry little teddy bears wake up. Nature calls and they clamber out of the pen to empty their little bowels and bladders, soaking the newspapers and decorating them with as many as twenty-five piles of poo! (I counted them.)

Clearly, they see no benefits to getting back in their pen and playing there like good doggies. No, dear readers, they bounce around the room, scrunching up the sodden newspapers, encrusting their little paws with puppy-poo and spreading it about most efficiently – in fact, they manage to get it even on the walls! (As I do not fancy this new form of decor, I find myself scrubbing both floor and walls every single day.) 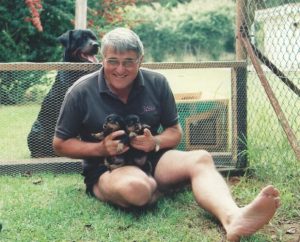 Barry inside the pen with Wolfie behind

Barry constructs a pen for them and I fill it with all sorts of interesting things for them to chew on.

This is not as successful as one might think.

On fine days, Lulu jumps into the pen and steals their toys. On rainy days (and there are still many, in spite of the fact that it is now autumn) they have to spend the day in the shed that serves as the upper garage. Consequently I am permanently cleaning up. No sign of constipation, I assure you! 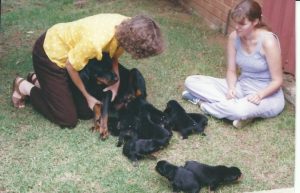 In the pen with Lulu, the pups and Tasha

Still trying to get a piece of their mama

We begin to let them play for periods outside the pen and they soon discover that there are two other dogs besides their mother.

It is quite apparent that Great-Aunt Purdey takes a dim view of the situation. She stays as far away as she can from them. She has shown no curiosity or interest in the puppies whatsoever and now that they are unleashed on the world, she keeps to herself in another part of the back garden from where she can survey the scene with lofty disdain. (We have mentioned before that Purdey has been unimpressed with our choice of Rottweilers from the very beginning, and she is now clearly even more unimpressed by our lack of common sense in actually producing more of them.)

Wolfie tolerates his many offspring quite benignly. However, being puppies, they are often so bold and audacious as to include him in their games, nipping him with their needle-sharp teeth. This elicits a menacing growl (which makes my hair stand on end) but he never snaps at them. He simply moves smartly out of their way. (To my great relief, I might add.)

Lulu gets the worst of it though. Although they are fully weaned, they have not forgotten the true purpose of a mama. She occasionally allows them to suckle briefly, but as they do not take care to keep those needle-sharp teeth to themselves, she soon leaps up and hastens away.

This then was the situation by the time they were seven weeks old.

We were looking forward, with eager anticipation, to the day the little darlings left home.

And if they had been able to talk, I am sure that Lulu, Wolfie and Purdey would have heartily agreed.