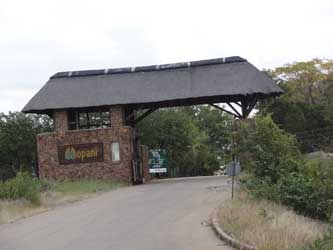 Mopani is a bit more than a kilometre off the main road (H1-6) on a rise overlooking the Pioneer Dam, which is on the Tsendze River.

The Tsendze, like most rivers in the Kruger Park, is seasonal. It is not particularly long, and is fed by a network of even shorter tributaries, so the size of the dam comes as a surprise

It is not visible from the main road and the first intimation you have of it is when you stand on the wooden deck of the restaurant, where about half of it is revealed in all its glory. The dam curves to the left, providing a splendid view of the other half to a number of the huts situated on the edge of the camp.

A panorama view of the northern section of the Pioneer Dam seen from the deck.

The huts, although close to each other, are screened from each other by both the vegetation and the clever lay-out. We found this camp to provide more privacy than any of the other camps. If you are the gregarious type you might not like this, but if you fancy the illusion of being alone in the African bush, you will certainly appreciate it. 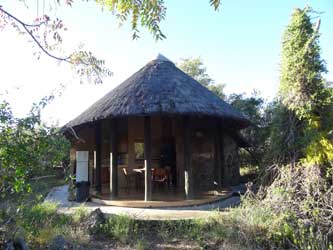 Our hut, far from any view of the dam! 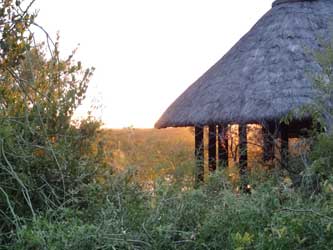 The neighbour to the left on the previous photo. A zoomed-in view of the approaching sunset.

Because of making use of every possible moment for exploring all the surrounding routes, we spent hardly any time at our hut, so we did not see much of the birdlife, but we did see a number of interesting reptiles, which scuttled around on the cement apron and in the bush surrounding the hut. As the photos were taken either at noon, when the strong contrast between sun and shade interferes with the focus, or at sunset when there is not enough light, the photos do not do justice to the beauty of these creatures. 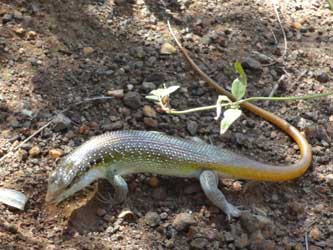 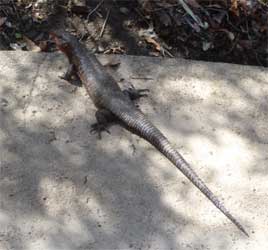 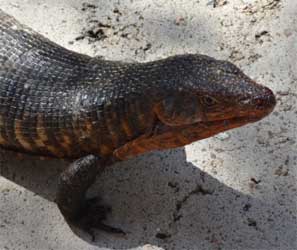 Close-up of the Plated Lizard 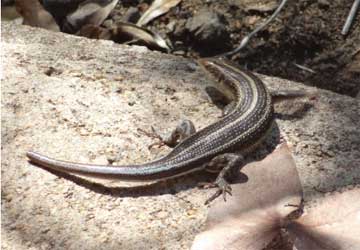 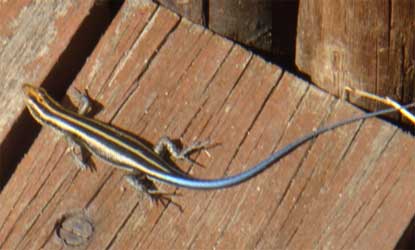 Rainbow Skink seen at the Pioneer Hide. The tail is bright blue, looking as though it has been dipped in a tin of paint!

We saw this one just shortly before we turned off the H1-6 onto the road to the camp. 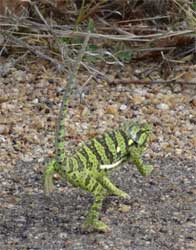 The swimming pools of the camps are always welcome features, especially in the summer months, and although Shingwedzi’s pool is my favourite, the Mopani pool is particularly scenically situated amongst the rocks and natural vegetation. It is a very family-friendly pool. My children would have loved it! (While they were young we had not yet discovered the north, and when they entered their teens they became allergic to sitting in the car for any time longer than a few minutes between sightings. The one prefers the ocean and the other mountains.) 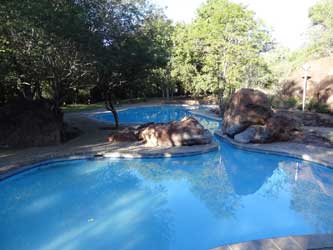 There are three features on this map with which we are concerned: The Pioneer Hide (mentioned above); Bowkerskop; and the Tropic of Capricorn.

Just a few kilometres to the north of Mopani to the left (west) of the H1-6 is Bowkerskop, an unmistakable landscape feature. You could be dropped blindfolded in the Park and, on seeing this koppie with its iconic baobab, you would know exactly where you are. 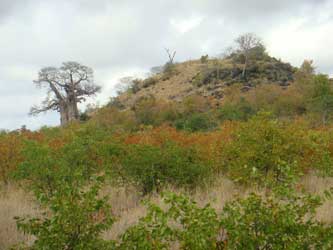 Bowkerskop in autumn - viewed from the north. 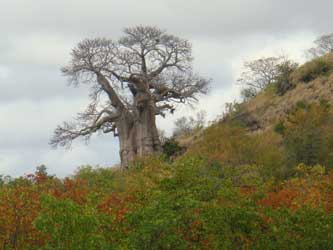 A close-up of the baobab, now bare of foliage. 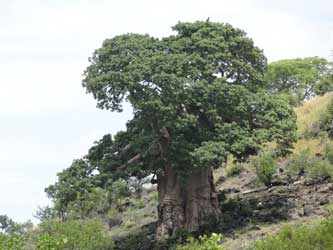 The Bowkerskop baobab in summer. 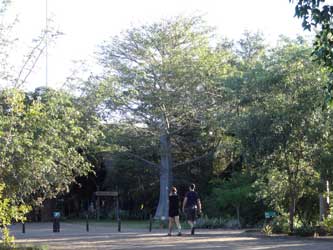 A young baobab in the Mopani Camp.

At Bowkersop, but on the opposite side of the road, is the Bowkerskop Waterhole, which has given us two wonderful sightings.

I have already mentioned (in the chapter titled Malopenyana) what a sight it was to see the full Malopenyana herd of buffalo at the Middelvlei Waterhole. It was the very next day, not even twenty-four hours later, when what we had seen the previous day paled into relative insignificance.

The famous Bowkerskop herd is estimated to be a thousand strong. They poured over the road from the Bowkerskop side to get to the waterhole. We sat watching for more than half an hour and still they came in a constant stream - four to five abreast.

A cloud of dust hung thick in the air as they crowded densely round the trough. We saw one young calf limping painfully alongside his mother as they left the waterhole and moved to one side. How the calves survived this crush, I do not know. 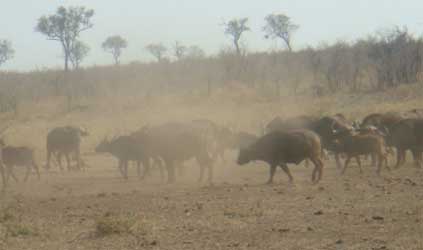 A tiny fraction of the herd on the outer edge away from the trough. 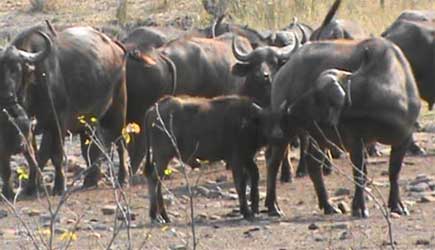 The calf holding its leg up. We were unable to tell whether it was a sprain or a break. (This is a still from our video footage.)

Barry got good video footage, but I gave up trying to photograph it. There is no way on earth that any photo taken from ground level could give anything but an inkling of the incredible sight which we were privileged to see.

As we were on our way to Shingwedzi, we eventually drove forward very slowly into the herd which parted to the left and right to make way for us. Looking to the left I was astounded (gobsmacked would be a good word!) to see that the stream of oncoming buffalo stretched back as far as I could see. It literally seemed never-ending, and I do not know how there could possibly have been enough water for all of them in that single trough.

The other exciting sighting we had at Bowkerskop was six months later, only this time we were returning from Shingwedzi to stay at Letaba. As we had left when the gates opened, it was still quite early in the morning and we struck it very lucky. We were the only ones there and so were free to stay in a prime position. (So often, in the more popular parts of the Park, you are obliged, for the sake of courtesy, to move on, thus missing out on excellent photo opportunities.) 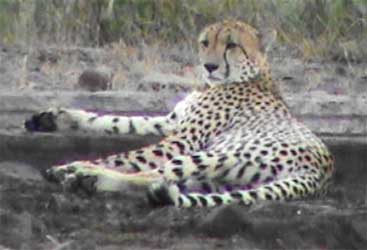 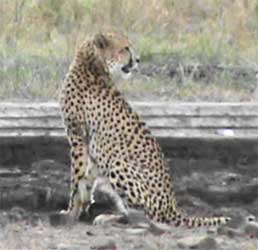 As we reached the waterhole we were thrilled to see two cheetah lying there. We sat for a good twenty minutes as they began to move around, wrestled with each other, and finally moved off, stopping only to scent mark a tree some distance beyond the trough.

(Because my camera had very limited zoom abilities, I have used stills from the video footage, so the images are slightly blurred.) 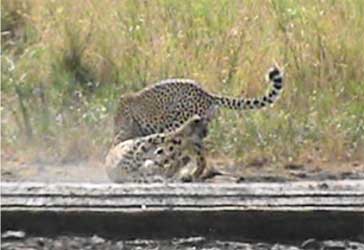 Another memorable sighting we had along this stretch of road was a year later when we were staying at Mopani. We set off in good time one morning to make a day trip to Shingwedzi, which is a good two and a half hours away. We had travelled about ten kilometres when I discovered, to my horror, that I had left my handbag (with cash, bankcards and all ID) behind in the hut. Muttering things not lawful to be uttered, Barry had to turn round.

But thanks to this absent-minded episode, when we set off again, we saw something which had not been there before. A very young hyena had come out of its den, a culvert under the road. It was so close I could have stretched out my hand and given its ears a scratch! (Not to worry, I wouldn’t dream of doing such a stupid thing!)

To our utter astonishment, it was still there when we returned late that afternoon! The poor little thing had obviously been waiting patiently all day for its family to return.

They are so puppy-like when still young. 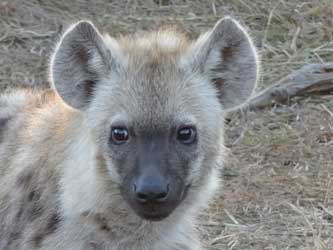 A little more than ten kilometres to the north of Mopani lies the Tropic of Capricorn.

For those of you who were asleep during your geography lessons in school, this is the 23½ degree line of latitude south of the Equator. The northern equivalent is the Tropic of Cancer. When the sun is directly over the tropic of Capricorn on the 22/23 December, the southern hemisphere has its longest day and shortest night. When it is directly over the Tropic of Cancer on the 21/22 June, the south has its longest night and shortest day. 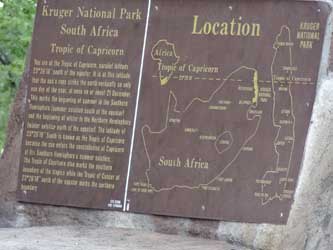 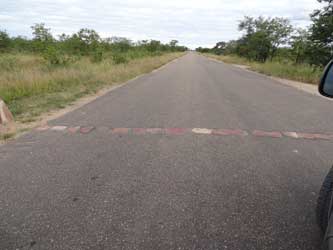 The H1-6, looking south towards Mopani - to the left lies Alice Springs and to the right lies Rio!

And, yes, I insisted that Barry stop directly over it so that I could open the car door and put one foot on it. As he was eager to get to Letaba, he had seen no point to getting out (which is permitted), and I had to take the photos from the car. Naturally, he thought I was crazy (about stepping on the line), but he has long since given up trying to understand some of the things I find important.

However, I am willing to bet that any number of you would have done the same. 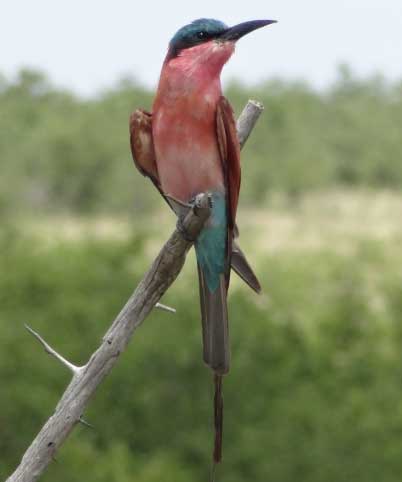