One of the animals we have not had much luck sighting is the African Honey Badger.

Early one morning, while we were staying at Shingwedzi, we saw our first one.

It crossed the H7 in front of us, but we were still too far away, other than to recognise what it was. By the time we had drawn opposite it and were in a position to get a photo, it was in the process of disappearing. I managed one quick shot. 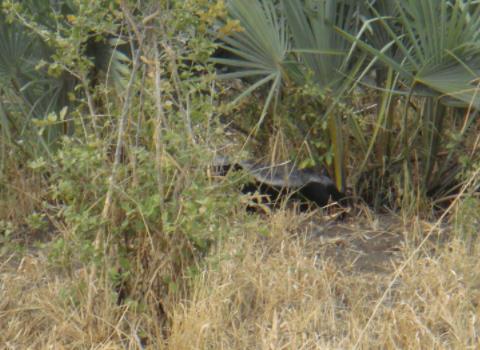 Six months later, we saw our second in the Satara area.

There is a resident badger which visits the Satara camp regularly and visitors to one of the guest houses there have often mentioned him (or her) in the Visitors’ Book. When we once had the privilege of staying at that particular guest house, we kept a sharp lookout for him, with our cameras always at the ready, almost salivating at the mouth in anticipation of the fantastic close-ups we would get. But to no avail.

The one we did see was on the S90, the Old Main Road to Olifants camp. Again it was a fleeting glimpse, at a fair distance, and I just managed to get two shots. I was thoroughly frustrated because I am almost sure it was a mommy badger with a cub in her mouth. 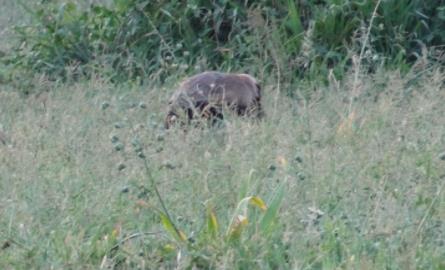 Scurrying away!
It seems they are always in a great hurry! 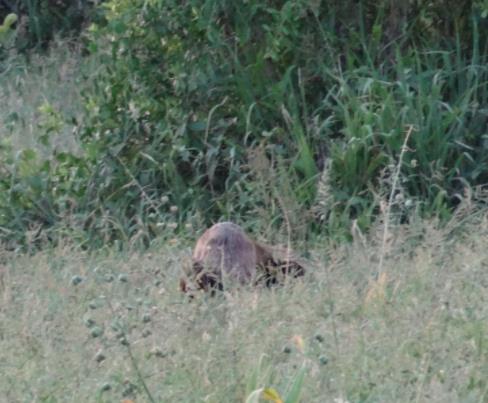 It would be a full eight years later that we met another one.

On our first night at Mopani that year, I took the precaution of putting a chair in front of the fridge on the stoep outside. I then jammed the chair against the fridge with the table, just in case some marauding animal was making its rounds.

After we had retired for the night, I heard scraping sounds from outside. Hubby and I looked at each other, but hubby declared that the sound was coming from the neighbour’s hut. Like a fool, I accepted hubby’s word for it. After all, his hearing is much better than mine. (I have had to resort to the assistance of a hearing aid in order to save my marriage. A hard-of-hearing wife and a mumbling husband is the perfect combination for murder or, at best, assault with a blunt instrument - like a frying pan.)

Some time later, as I was preparing to get into bed, something told me to go and have a look and check on what all that scraping had been about.

A scene of devastation met my eyes! The fridge stood wide open and the contents, including several plastic containers containing, amongst others, a week’s supply of cole slaw and potato salad, plus our padkos for the next day, lay strewn about. Hubby was particularly incensed that his precious ten-day supply of biltong - several large cuts of silverside with a beautiful layer of fat down the side of each - had been almost ruined. All the fat had been eaten off!

I repacked the fridge, hugely thankful that I had gone to check. If the salads had been left out all night in the Lowveld heat (March is still hot) they would almost certainly have gone off. (Hubby took his stash of biltong inside, where he observed five minutes of silence in respect of its near demise.)

We jammed the table against the fridge, using several chairs between the table and one of the poles on the stoep. Then we went to bed, thinking sad thoughts about the immoral behaviour of the badger kind.

Next morning, bright and early, we got up, ready for our day.

And what do I find?

The blighter had returned, had laughed our table-and-chairs defence to scorn and had once again scattered the contents of the fridge all over the stoep. Not finding any biltong, he had taken two 900 g blocks of Lancewood white cheddar (which we found later that afternoon under a bush near the hut. After a day in the heat, it was in a sad state, aside from the fact that it was half consumed, leaving a perfect impression of its teeth.). 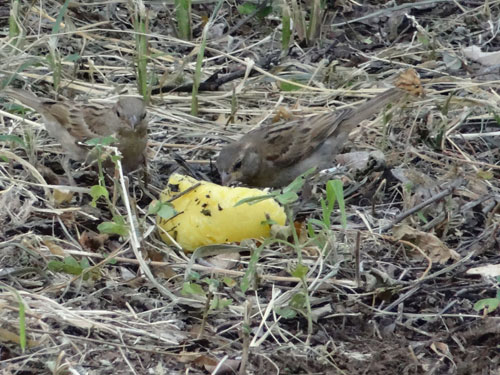 The remains of one of the blocks of cheese.

He had not opened the salad containers but they were warm. He had managed to open the container containing our padkos - there was no sign of the braaied wors, chop and chicken pieces. I suppose I can be thankful he left the container behind. He had bitten a hole in the grapejuice carton, but it was obviously not to his taste. Most of it was still in the carton. All fresh fruit and vegetable were intact, but warm.

Later, after we returned from our morning drive, Barry popped in at reception to tell them about our experience. Yes, they knew all about the badger. Hadn’t we seen the notice on our fridge warning us? No, we had not! Mainly because there was no notification on our fridge.

Back at our hut, we paid a brief inspection visit to some of the neighbouring huts and they all had notices on their fridges, warning of the nightly visits and advising visitors to turn their fridges round in the niche! Just our luck that we had the only hut in Mopani which, for reasons unknown, had no warning notice.

The following year, March again found us at Mopani. This time were were ready for the Menace. Hubby turned the fridge around and pushed it into the niche. The plug on this fridge was a problem though, and because he was concerned about damaging it, he did not push the fridge right to the back of the niche, declaring that there was no way the Menace would be able to get it out.

Yes, you guessed it.

There was a way.

I came out the next morning to a familiar scene. (Excepting that the biltong was kept inside the hut. Just in case.)

That incredible animal had obviously worked out that if he climbed over the wall into the niche, between the wall and the fridge, he would be able to push it out. We just had to admire his intelligence and initiative, even though we would have liked to wring his neck.

That same evening, while sitting on the stoep eating our supper, and while the fridge was not yet securely in its niche, I looked up from my plate and what do I see? The Menace himself! He had the fridge door open in a flash. I gave a squeak of dismay. Hubby whirled round and leaped up with a yell of outrage to defend his food supply. The badger gave him one dirty look, which clearly stated, “You don’t frighten me, you pathetic human,” and then sauntered off, no doubt to look for an unguarded food stash.

And, no, we did not have our cameras available. They were both inside being charged.

What a lost opportunity!

To our great amusement, our neighbour was plagued by one of the tree squirrels which abound in the Park. This particular little guy had become very adept at raiding cupboards. (No doubt from watching the Menace’s modus operandi.) When our neighbour came out onto his stoep, it was to find the squirrel inside the cupboard, helping himself to a rusk or two.

In great indignation, he yelled out, “Jou klein bliksem!”

Thereafter, we referred to the Menace as the “groot bliksem”.

Joking aside though. Even without considering their tough reputation, I would not approach an African Honey Badger too closely. They are not very large - more or less the size of a Staffie or a Pitbull. But they are very stocky, very muscular and have excellent teeth. And they are completely fearless.

If you have never heard about Stoffel, I am including a link so you can see for yourself what an amazing creature the African Honey Badger is.