I grew up with dogs and my childhood experience with cats was limited to two.

The first was Chang.

My younger sister Christine came to my mother one day with an earnest request.

Her friend’s cat had produced a litter of dear little kittens and could she please have one?

My mother, lulled by the fact that this cat came from a vicarage, gave permission, and soon a black, long-haired kitten, with white paws and a white bib, entered our unsuspecting home.

For Chang turned out to be from the dark side.

In our garage were two cages – one with mice and the other with a hamster – and feeding them had gradually become my responsibility. (This is generally what happens to the eldest child when the novelty of rodent pets wears off.) I did not mind, however, as I still found them to be cute and entertaining.

The mouse cage was a large wooden box, the front of which was a hinged flap that opened downwards. The flap itself was a frame covered with fly screen netting and it was secured to the top of the cage with flexible wire loops.

One afternoon I went into the garage only to find the flap down leaving the mouse cage wide open! There was no sign of any mice and closer investigation revealed that the wire loops had been chewed off!

To say that I was upset is an understatement. What right had that fiend had to come and make a meal of our sweet little mice! And where did he get the reasoning power to figure out that chewing those loops would open the cage, in the first place? No, dear readers, sinister forces were definitely at work!

The hamster managed to gnaw his own way out of his wooden cage, and was also never seen again, no doubt having suffered the same fate as the mice. There was no proof, but I knew that devil’s spawn was responsible!

Chang, being an unneutered tomcat, was often away, sometimes for days at a time, and eventually he simply never reappeared. (Unmourned by me, I assure you.)

So it was with a rather suspicious eye, a few years later, that I regarded the arrival of Max, my dad’s Siamese kitten, even though he was exquisitely beautiful. His colouring was typical. A smooth, creamy coat, with chocolate face, ears, paws and tail tip, and with the most beautiful deep blue eyes.

However, after being woken a few times early in the morning by a dead weight on my chest, and then on opening my eyes discovering those blue eyes peering intently into mine, my heart melted. There he would lie, contentedly purring on my chest. How could I resist him?

He was so different from Chang, being friendly and very affectionate, and soon the whole family had fallen under his spell.

We had had him rather less than a year when disaster struck. He fell victim to cat flu (there was no local vet and most pets in our vicinity had to take their chances) and, within a very short space of time, we were left heart-broken.

He was sorely missed.

In due time, I left home, graduated from university, and got married.

Within a year of our marriage, Barry and I acquired our first pet – a miniature French poodle we named Bambi.

Bambi was absolutely adorable. She had boundless energy and springs in her legs. She was amazingly intelligent and soon we were teaching her all sorts of tricks. 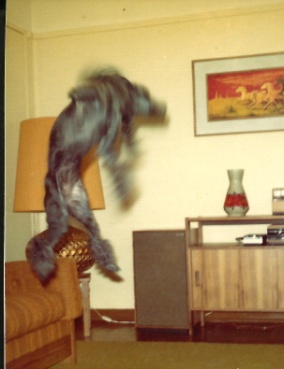 Leaping to catch a bouncing ball

Unfortunately, she had to spend a great part of the day on her own, as I was teaching at the time. Although she soon got used to it and seemed to accept it quite philosophically, we felt that it would be better if she had company.

One of my pupils owned a Siamese cat which had providentially had kittens. My ears pricked up. With the memory of Max still clear in my mind, it did not take me long to decide.

One Friday afternoon I brought Velvet home to be Bambi’s friend.

Velvet’s first action upon coming into the house was to take fright at the sight of Bambi and to run up my (new) lounge curtains. This was a bit daunting, but fortunately they were sun-filter curtains (highly fashionable at the time) and did not suffer any noticeable damage.

Once I had retrieved her from the top of the curtains, I introduced her to Bambi, who was bouncing around me showing only friendly curiosity.

But I had not taken into consideration the age difference. Although they would eventually be about the same height (for Bambi was very small, being the runt of her litter), she was, at twelve weeks, twice the age and three times the size of the kitten.

With her nose down on her front paws and wagging her little pom-pom furiously, she invited Velvet to join her in a fun game. Before I could intervene she grabbed her by the ear and ran off with her, poor little Velvet yowling an indignant protest. Needless to say, we had quite a few more excursions up the curtains!

I had deliberately brought Velvet home on a Friday so that we would have the whole weekend for them to get used to each other while under constant supervision. My hopes that Bambi would soon calm down and allow Velvet to get used to her were forlorn. By Sunday I had to face the facts. There was a real risk that the kitten would be injured or possibly even killed. My dream of lying in bed with my little poodle snuggled at my feet while my Siamese cat purred on my chest lay in tatters. 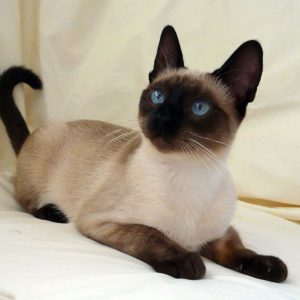 From the public domain – very similar to Velvet Cat

I went to my parents, who lived just two blocks away, and asked them if they would be willing to give Velvet a home. With only two dachshunds (both staid and well past puppyhood) to contend with, Velvet would be assured of a safe (and peaceful) environment.

And so she became Velvet Cat, outlasting the above-mentioned dachshunds, as well as a number of other dogs over the years. She chose my mother as her special human, possibly because my mom has no great fondness for cats and did not fuss over her.

For Velvet Cat turned out to be a bit of a loner, perfectly content with her own company and wanting nothing more than her food and a sunny spot where she could while away the hours. That is, when she wasn’t hunting, for she was also the terror of the neighbourhood’s turtle dove population!

I have an enduring memory of her sitting inside the house on my mom’s bedroom window sill, one of her favourite spots. Here she could enjoy my mom’s company while warming herself in the wintry sunshine, and with the added bonus of being able to keep an eye on the birds outside. 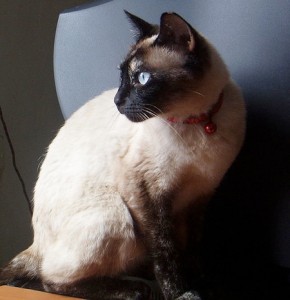 Also from the public domain – how she appeared when watching birds

By the time she reached the ripe old age of seventeen, it became clear to my mom that she did not have much longer to live.

One freezing winter’s morning she found Velvet Cat in the passage, dragging herself along with her front paws. She had become completely lame in her hind legs. After placing her in front of an electric heater and covering her with a blanket, my mom rushed off for her weekly hair appointment. She did not go on to work but came home as soon as her hair was done, as she did not like the idea of Velvet Cat dying all alone.

But it was too late. Velvet Cat had quietly passed beyond all suffering, leaving my mom, the non cat lover, quite bereft.