After the harrowing events related in Little Man, I am sure you will agree that Lulu could not be trusted with the safety of her puppies.

We had only two options. Either we intervened drastically or we let nature take its course with the strong probability of more dead puppies. A no-brainer, really.

Besides the safety aspect, Lulu also did not have enough milk for eleven growing and very hungry puppies.

So, to keep them safe and to ensure that each puppy got a fair share of mother’s milk, we divided them into two groups, each group being kept in a separate box lined with towels. We also soon threw out the offending blanket in the pen and replaced it with yet more towels. (I was in the most fortunate situation of having inherited many old towels from Barry’s mom, as I was soon washing twelve towels a day!)

At feeding times, we would alternately give Lulu one group of puppies while we fed the other. Now, while Lulu was biologically equipped to feed six puppies simultaneously, Tasha and I only had two pairs of hands between us. So, while we fed the first two puppies of the bottle group, the other members of the group let it be known that they were most unhappy with the arrangement. And I can assure you that three or four frantically hungry puppies produce a cacophony of deafening proportions! 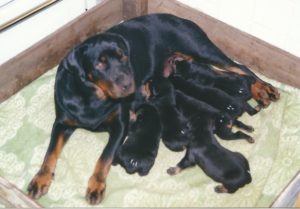 Lulu with six while we feed five.

We now learnt things about the excretory systems of puppies of which we had been abysmally ignorant.

For instance, do you know that mother dogs do not constantly lick their puppies because they are obsessed with cleanliness?

No, dear readers, it is because their little bladders and rectums need to be stimulated in order to function properly! Therefore balls of cotton wool soaked in warm water have to be used to simulate the licking. My education was being broadened by the day.

Furthermore, in the interests of taking every possible step to prevent constipation, each time a puppy was bottle fed it also had to be given oil in a dropper. All eleven had to get a daily dose of a laxative as well. As you can imagine, feeding time was both energy draining and time consuming.

As if all this were not enough, the weather continued to be foul and spiteful. It was a perfect time for Murphy to pay us another visit. Yes, my tumble drier broke down. There were many days when I was knee deep in wet towels, distractedly drying them over electric heaters. I had never had less fun in my life!

The unnatural separation from her puppies soon had a most unfortunate effect on Lulu. She began to lose interest in them and often would rather have gone outside. I would have great difficulty getting her to lie down so I could give her the pups for their feed. I became so exasperated that I dealt her a ringing slap on more than one occasion.

She also had a habit of flipping over onto her back for a tummy rub while the puppies were suckling. Those puppies with a strong grip would each dangle precariously from a teat while those which were half asleep would be sent flying!

Poor Lulu. She was just being a silly young dog. (The pups had been born five days after her first birthday. She was scarcely out of puppyhood herself.)

Purdey, Wolfie and the cats faded into the background. Besides ensuring that they were fed, I left their care and exercise in the capable hands of Tasha.

She took Purdey and Wolf for regular walks around the dam and it was on one of these walks that Purdey had what turned out to be her final adventure. (Don’t panic. She did not die. How many adventures can a twelve-year-old dog have?)

Purdey lived for those walks. Stiffness and senility were forgotten and she became quite spry. Her eyesight was no longer what it had been but there was nothing wrong with her nose! She gaily ran along the forest roads, sniffing to her heart’s content. It was possible that she was also becoming deaf as she sometimes did not respond as readily as she used to. However, it appeared that on some occasions she would be somewhat deafer than on others, so it began to seem that Purdey only obeyed when it suited her.

On this particular day, as they rounded the dam onto the homeward stretch, she spied the resident family of Egyptian geese.

Determined to save us all from the machinations of these evil birds, she leapt into the dam and began to swim after them, all the while barking frantically. The gander did what all good daddy geese do: he pretended to have an injured wing and flapped invitingly just out of reach. In the meanwhile, Mommy Goose got her little goslings safely to the other side of the dam.

Daddy Goose had a marvellous time and led Purdey past the front of our property, past the island in the middle of the dam, and past the pump house, which was situated between our house and our nearest neighbour.

View from our property of the dam where Purdey’s epic swim took place. She came from the left, swimming past the front of the island towards the earthern dam wall which can be seen at the far end of the dam – centre right on the photo.

Because of all the rain, the dam was as full as it could hold, the water even extending some five metres into our garden.

(During these weeks of flood, Wolfie had a fantastic time at the bottom of the garden splashing about trying to catch the quite large fish which had mysteriously managed to get through the mesh of the fence, and which swam about looking very much like elusive shadows. He loved playing in the water but, unlike the other dogs, hated being out of his depth, so was a most reluctant swimmer. His version of doggy paddle was quite hilarious. He simply could not grasp the concept that swimming involved moving through the water. Instead, he persisted in trying to climb on top of it! His frenzied splashing together with his wildly bulging eyes became known as Wolfie-paddle.)

The full dam meant that Tasha was not able to take a short cut past the front of the property as was possible during the dry season. She had to run all the way round the back of the property to regain access to the shore. By this time, goose and dog had traversed about three quarters of the length of the dam, no mean distance for a geriatric poodle! 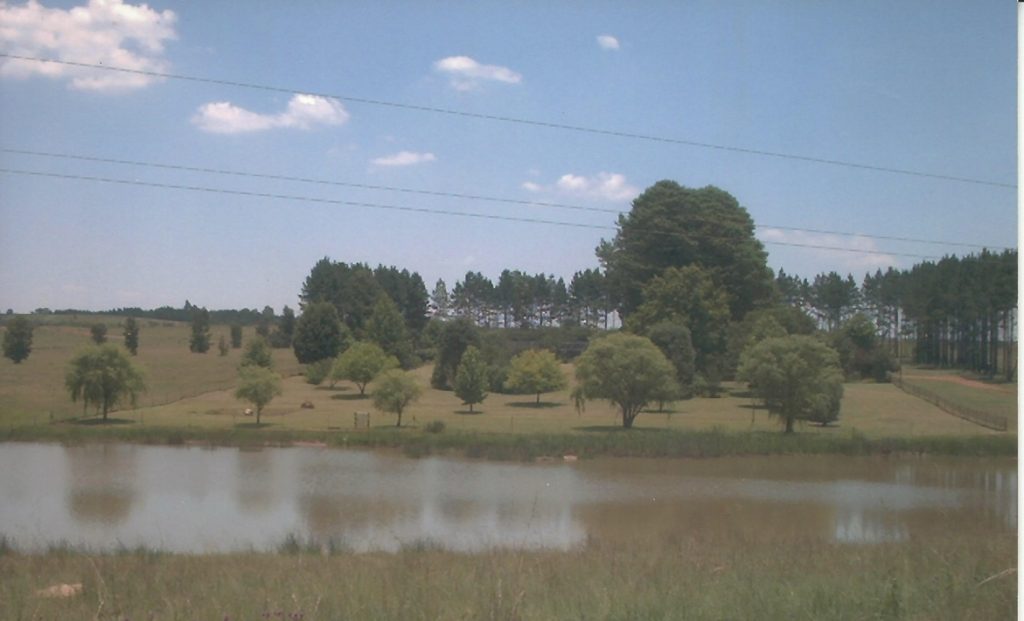 View from the other side of the dam looking towards our property. The swim started out of view to the right of the photo. The road around the property can be seen on the right in front of the ring of trees – all that was eventually left of our surrounding forest. At the time of this incident the forest was still there. ( See Coming and Going ) Tasha had to run all the way round coming down the other side of the fence, which can faintly be seen on the left.

During this entire process, Tasha had been calling Purdey, shrieking herself hoarse, but it was one of those times when Purdey was deaf. (It is also a testament as to how large our property was because I remained unaware of all the excitement. I heard not a thing. Admittedly I was busy with very noisy puppies.)

Suddenly the exhausted Purdey disappeared under the water!

Tasha was horrified but to her relief Purdey resurfaced almost immediately. However, her relief was short lived. Purdey went under again. Tasha realised that Purdey was going to drown and there was no one but herself to save her.

Now Tasha, it must be understood, was only mildly fond of Purdey (and not at all at that moment, she has informed me). She frantically tore off her shoes and socks and tracksuit top and leapt into the dam to save the senile idiot. 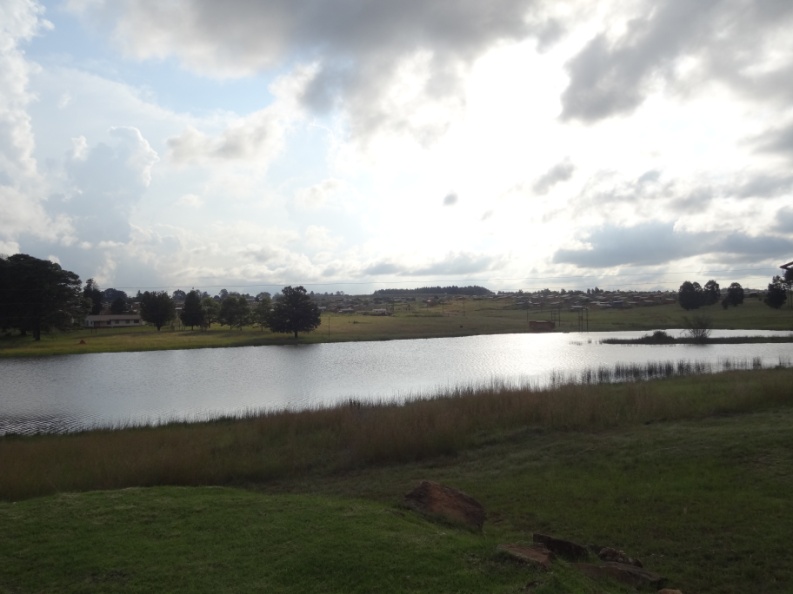 This view is from Barry’s driving range on the other side of the dam. Our property is off the photo on the right. From this viewpoint, Purdey’s swim was from right to left going past the back of the island. On the shore the pump-station can dimly be seen just to the left of the island. On the left of the photo is the house of our nearest neighbour and it was opposite this house where Purdey went under and Tasha entered the dam. (The houses which can be seen in the middle background were built about seven years after the wild goose chase.)

Tasha swam as fast as she could.

As she put out a hand to grab hold of her, Purdey saw her. It was only then that she snapped out of her chasing trance and abandoned the pursuit. Although she was completely exhausted, she managed to follow Tasha without having to be pulled along. It seemed that instinct and habits of obedience gave her enough impetus to reach the shore on her own.

There is no doubt whatsoever that if Tasha had not been there, the crazy dog would have quietly drowned, and we would never have known how or why she had disappeared.

With legs horribly scratched from the hidden reeds in the dam, Tasha squelched her way home. Then, to add insult to the injury, she noticed one of the company security guards standing at the pump house. To her annoyance he was sniggering (as she indignantly put it) and had clearly been thoroughly entertained.

They arrived home dripping wet and shivering with the cold, and as I was still in mid-feed, Tasha gave Purdey a brisk rub down with a towel. (Just how brisk I leave it to you to decide!)

By the time I had finished with the puppies, Purdey was still freezing cold and shivering violently. I took her to my bedroom and dried her with the hairdryer but the shivering continued, with her teeth chattering in the strangest way. Her breathing was also laboured and gasping. I put her in the sunroom next to a heater and covered her with a blanket. The clackety-clacking of her teeth and the rasping breathing continued.

There was only one thing to do.

Leaving Lulu and the puppies with Tasha, I took Purdey through to Piet Retief.

Now, I ask you, with tears in my bright blue eyes, how can a dog get pneumonia in half an hour? (Okay, my eyes are gray. So sue me.)

The vet said it was certain that she had already had something brewing, and the stress of all the exertion in the dam had simply accelerated the condition.

So, once again, I had to administer antibiotic injections to a dog. Mercifully she recovered.