The state of war between the cats and the poodles evolved gradually without us even being aware of it until it was really too late to do much about it.

Ginger and Katy were four years old when Purdey and Gambit entered our lives, but as they were mostly outside dogs, the cats continued to reign supreme inside the house. There they could engage, unmolested, in their crazy chases down the long passages (sounding like a herd of wild horses as they thumped along the hollow wooden floors) usually ending in a wrestling match in my bedroom.

These matches would perfectly illustrate the differences in their temperaments. Ginger’s approach was quite good-natured – she was really just having fun – but Katy took them very seriously. Ginger would be crouched down, her ears flattened, while Katy, head pulled back and eyes widened, stretched out an imperious paw onto Ginger’s head to keep it down on the floor, all the while yowling in a most unearthly fashion.

No need to guess who Top Cat was!

Ginger was also a musical cat. Whenever Tasha practised her music, Ginger would lie comfortably on top of the piano for the entire duration. She occasionally even played the piano herself, marching up and down the keyboard, apparently much taken with her own giftedness.

At night, though, the cats were put outside; Katy happily going off on her hunting expeditions, while Ginger, cruelly yanked out of her snug position in Tasha’s bed, would go and sulk in the cat basket, which was placed on the sheltered porch at the front door. (But, fear not, cat lovers, it was lined with feather pillows and blankets on the inside and a thick plastic covering on the outside, so was snug and safe, irrespective of the weather.)

The dogs, of course, were mostly confined to the back garden, only coming to the front when we allowed them to join us for a walk or to play, which meant that the cats were hardly ever in their company and it never occurred to us that this separation was rather unwise. It was all so convenient.

Seven years later, when we moved to Vaalpark (an outlying suburb of Sasolburg in the Free State) the back and front gardens were separated in the same way, so, once again, their antipathy towards each other did not really matter.

By the time we moved to Iswepe, the cats were fourteen years old, and although the garden was also separated into back and front sections, it was not cat friendly at all, especially for old cats.

Both our gardens, in Mhlambanyati and Vaalpark, had been planted with many leafy shrubs, which provided ample cover for them whenever they left the security of the house. Iswepe, however, was a totally different matter.

The garden was huge and the shrubs were along the fence, some distance from the house. This meant that they could not leave the house without immediately being spotted by the dogs, whose favourite haunt was at the gate between the front and back garden, in full view of the sunroom door at the side of the house – which we used as our main entrance. (I have already described the weird front door of this house. (See Coming and Going.) Those poor old ladies could not stick their noses out of the door without setting off an uproar, and once the pack was joined by the Rottweilers, who, just incidentally, added hurling themselves against the fence as part of their intimidatory tactics, the cats became very reluctant to leave the house.

There had also been a Most Unfortunate Incident.

About the time when Lulu had just left puppyhood, she and Wolfie, finding the kitchen door open, came bounding joyfully into our lounge to greet Tasha, who was sitting on the couch. As per usual, Ginger was comfortably ensconced on Tasha’s lap.

Her curiosity aroused by this strange animal, Lulu boldly charged forward to give Ginger a good sniff. (I have already described Ginger’s attitude to this kind of approach from dogs. See The Bold and the Vicious). With several lightning fast slashes, she created an interesting pattern of blood beads on Lulu’s nose. For a split second Lulu stood frozen. Then her eyes blazed as shock was transformed into murderous rage.

Wolfie was just as outraged. This evil creature (which he had occasionally espied through the back fence) had dared to attack his Lulu and had accomplished it with such speed that he had been unable to protect her. He instantly joined in the mission of forthwith dispatching Ginger to the Great Cattery in the Sky.

Tasha instinctively lifted both legs to hold the dogs at bay, while Ginger stayed put, claws out to hang on with all her might, absolutely determined not to be ousted from her rightful place. Tasha found the absurdity of Ginger’s behaviour so funny that she was unable to successfully assert her authority to order the dogs off.

Mercifully, Barry was within earshot. He rushed to the rescue and, grabbing both the enraged Rotties by their collars, hauled them out of the house. Completely unperturbed, Ginger settled down to continue her rudely interrupted snooze.

After Schnudl’s return from her enforced stay in Vaalpark, things went from bad to worse. 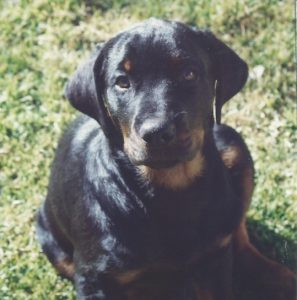 Tessie Bear – the chosen one

Barry, Tasha and I went off to Manaba Beach with Tessie Bear (the chosen puppy), and my parents came to house and dog-sit as usual, accompanied by Schnudl’s swain, Rambo.

Schnudie, finding courage in the presence of Rambo, and, needless to say, aided and abetted by him, set about terrorising the cats. The two of them routed those cats, horse, foot and artillery. The cats had no option but to spend the two weeks of our absence hidden away or on top of the sideboards and piano in the dining room.

One morning just before our return, my mom let Purdey and the Rotties into the front garden to take them for a walk down to the dam. Wolfie, noticing Katy sitting and sunning herself behind a curtain on the sunroom windowsill, leaped at her from outside and thoroughly cracked the window pane. Although the pane remained more or less intact, several splinters of glass flew onto the floor.

When we returned it was to find the cats squashed up together on one of the dining room chairs, where they had apparently taken permanent refuge since the window incident.

Once my parents left with Rambo on the day after our return, however, things more or less returned to normal.

But it was not long afterwards when we had another Incident.

Ginger was outside at the front of the house. She had completed her morning ablutions and, instead of re-entering the house via one of the sunroom windows which was permanently left open for the cats (seeing that the door was so hazardous), had decided that she wanted to get in via Tasha’s bedroom window. There she sat in the flowerbed stubbornly insisting that Tasha help her to get in, the window being too high up for such an old cat to reach without assistance.

There was only one problem. Tasha was not in her room. (Aside from the fact that she would not have been able to reach the silly cat, even if she had been.)

Tasha had gone out the back door to take the dogs for a walk in the front garden!

As they came around the corner, Wolfie immediately caught sight of the evil cat and sprang into instant action.

Abruptly abandoning her quest to get into Tasha’s bedroom, Ginger raced off with Wolf in hot pursuit.

Now, it must be understood that, of all the dogs we had had up to that point, Wolfie was Tasha’s darling. Being Walker-in-Chief as well as Number One Shadow Maker, she, out of the whole family, had the closest connection with Wolfie.

All love and affection instantly evaporated.

She chased after them with what speed she could muster, screeching at the top of her lungs at Wolfie that she would kill him if he dared to touch her cat!

Mercifully, Ginger reached a very large and overgrown apricot tree which grew close by on the other side of the house and shot up it like greased lightning. She hadn’t moved that fast in years. Supported by Lulu, Wolfie kept leaping up at the tree, determined to get That Cat once and for all.

Summoned by the commotion, Barry and I came on the scene in time to herd both dogs back into their part of the garden before Tasha was able to carry out her threats, or alternately, burst a blood vessel. Livid with rage would be a fair description of her frame of mind.

We were now able to turn our attention to getting the cat out of the tree.

Ginger, having climbed well up the tree, was quite out of reach. All attempts by Tasha to soothe her and coax her out of the tree were in vain. She refused to budge.

Barry tried to climb the tree. Being extremely overgrown it was unclimbable.

We fetched our ladder. It was too short.

There was only one solution. Barry fetched a saw and cut down the branch Ginger was on and as it swung earthwards Tasha caught her. Clasping her beloved to her bosom, she carried her off to safety.

It was several days before she could look at Wolfie without muttering darkly about his viciousness, brutality and downright depravity.

This final episode had repercussions, which, had I known the details beforehand, I might well have packed my bags and left for Timbuctoo or Outer Mongolia.

But that is another story.