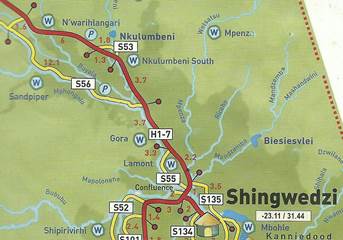 This is the first 10 km or so of the H1-7 and includes the S55 and the S53, two small loops to the west and east respectively. The lower part of this section closely follows the course of the Mphongolo River to the southern entrance of the S56 (Mphongolo Loop), as can be seen on the map. The upper part, after the entrance to the S56, follows the course of the Nkulumbeni River and ends at the bridge over the Nkulumbeni.

We have had only three sightings of lions to the north of Shingwedzi. Two of them were very early morning sightings and took place just a few minutes after crossing the bridge over the Shingwedzi. The first was of a lioness who was equipped with a tracking collar. She had obviously had a good feed but was quite restless and did not settle. We waited a while, hoping that she was waiting for her pride to join her, but our luck was out. She soon moved out of sight.

The second was a lion that lay majestically ignoring us in the middle of the road. He faced the east and was clearly enjoying the early morning sunshine. He did occasionally turn to give us a baleful stare and eventually we had to drive round him. He had no intention whatsoever of moving from his warm spot. Both sightings were in May (though three years apart), which explains the attraction of the warm road! 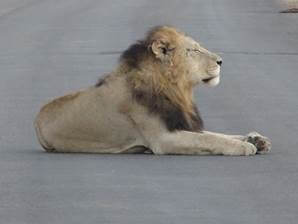 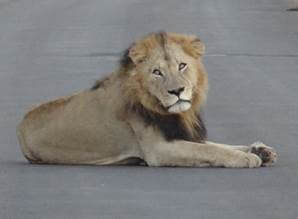 The S55 is a 3 km loop, and although it follows the course of the Mphongolo River, it does not offer any views of the river itself. We have not found it to be very productive, though one early morning we had an excellent photo opportunity of a pair of Double-banded Sand Grouse at the side of the road. We have looked at them before (see Mooiplaas) but they posed so beautifully that we will reward them with another look. And then, just minutes later, we saw a second pair, who were just as obliging! 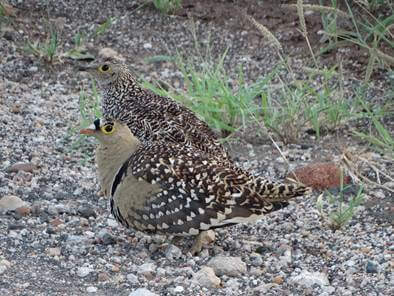 Mr Sand Grouse is in front.

What the S55 does often provide is elephant sightings. There is a concrete reservoir (Lamont Waterhole on the map) right at the edge of the road and it is a very popular watering spot. However, this can lead to tricky situations because, as we have noted before, some elephants do not like to get up close and personal with the smelly, noisy, tin boxes on wheels that roam so freely on the roads!

The reservoir can be seen from the northern entrance, so you can guage whether you will be able to get past or not, so my personal preference is to go into the loop from there. 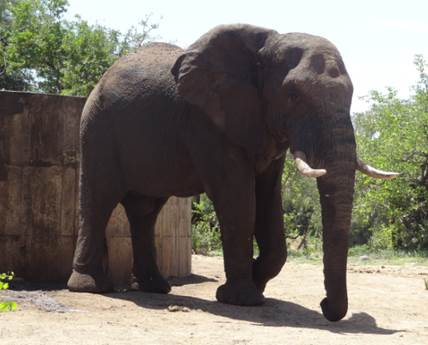 This youngish bull was a case in point. We came from the southern side so had no idea he was there. It was a very hot midday in January and he was peacefully slaking his thirst. But the moment we arrived, he turned round in irritation and gave us the old lift the leg ploy. We took our photos as quickly as we could and got out of there. The harsh light and the angle of the sun made it very difficult to get a clear shot. (I like to be able to see the eyes!)

On another occasion, we reached the northern entrance to the loop and saw a number of elephants at the reservoir. There was a young elephant in front, close to the road, but the rest of the herd was behind the reservoir. However, once we had passed the reservoir, what should we see right next to the road but a nervous mama with her little one! As expected, she was not thrilled to see us. Fortunately, she was more interested in putting herself between us and her baby than in threatening us. We did manage to get a few photos before driving off to leave her in peace.

One in front and the rest behind. 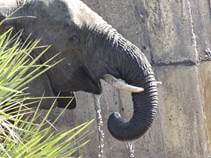 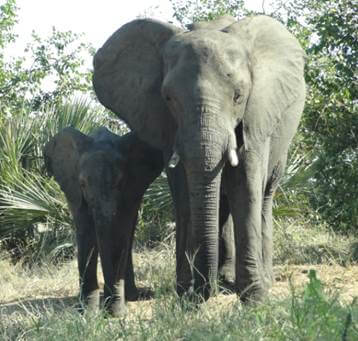 Once you are past the S55 loop, you get very clear views of the Mphongolo River to the west. We always keep our eyes peeled looking out for leopards in the trees on the banks but so far have not had any luck. The eastern side of the road usually provides good sightings, especially later in the morning when thirty animals start making their way to the river. These three lone bulls were doing just that. 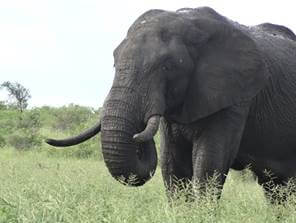 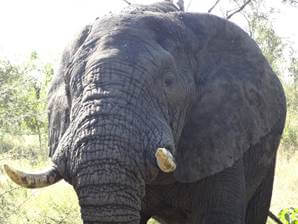 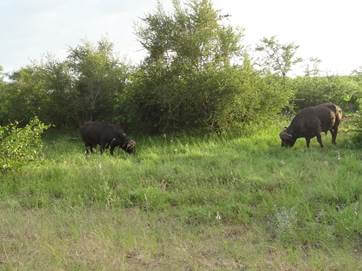 Another frequent sighting along this stretch is one we are familiar with, the old buffalo bulls, known as the dagha boys. We have already seen a number of them in previous chapters, but I want to focus on this particular sighting for one reason - a closer look at oxpeckers.

The photo on the left provides the context - a very early morning scene of two bulls having their breakfast. Below are close-ups of the bulls above. The one on the right is the one of particular interest. 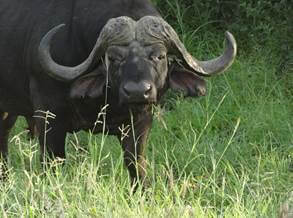 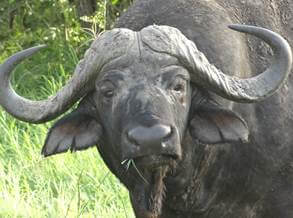 Bull-on-the-right had a whole family of Yellow-billed Oxpeckers busy on his back, his neck, his hind legs - they were everywhere! I managed to get six of them in one spot, which took some doing as they were just as busy as the bulls were getting their own breakfast. 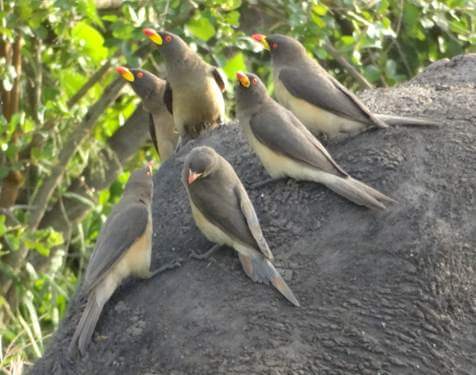 There are two species of oxpeckers to be found in the Kruger Park. The one we are looking at in the photo above is the Yellow-billed. The Yellow-billed Oxpecker was practically exterminated from South Africa by the Rinderpest virus epidemic of the 1890’s (and cattle dips do much to decimate their numbers too). It was only in the 1970’s that they began to return from the north. They are to be found mainly in the northern parts of the Kruger Park (where no one dips cattle!), though we have had a sighting just south of the Olifants River in the central part of the Park.

The other species is the Red-billed Oxpecker. The two can easily be distinguished by two very obvious differences, as seen in the photos below. These photos were not taken on the stretch of road we are currently dealing with. The Yellow-billed was taken further north on the Shisha section of the H1-7 and the Red-billed on the H13, the road to Punda Maria. 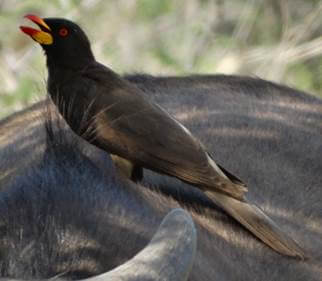 Yellow-billed Oxpecker on a young buffalo 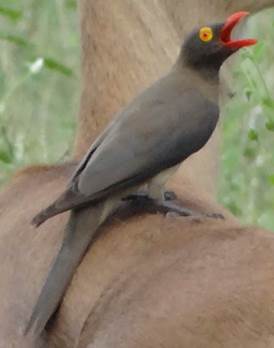 Red-billed Oxpecker on an Impala

The chief difference is suggested by their names. The Red-billed Oxpecker has a completely red bill while the Yellow-billed has a yellow bill which is red tipped. A careful look will also show that the lower part of the bill (mandible) is wider than that of the Red-billed.

A second very obvious difference is the colour of their eyes. Both species have red eyes, but the Red-billed has a yellow wattle around the eye, which, at first glance, gives it the appearance of having yellow eyes.

The feeding habits of the oxpecker plays a vital role in controlling parasitic infestations on the host animals. They have two methods of feeding: they either peck the actual ticks off the host animal, and even drink blood from the wounds; or they “scissor”, which is to comb their bills through the hair of the host animal to feed on other parasites such as lice, fleas and skin mites, including the larvae of all these pests.

I have noticed that the Red-billed Oxpecker prefers the hairier animals such as antelope (especially Impala), giraffe and zebra and even warthogs, while the Yellow-billed prefers the larger animals such as buffalo, rhino and hippo. (We have yet to see any on elephants. I am quite sure the elephants would instantly swat them with their trunks!) But nothing is set in concrete and we have seen Yellow-billed Oxpeckers on antelope too.

The Yellow-billed Oxpecker below was one of those on the Bull-on-the-right. It was directly into the sun (with the usual consequences!). The photo of the Red-billed Oxpecker was taken on the Mphongolo Loop and has had to be hugely enlarged (and cropped) so it has lost focus. 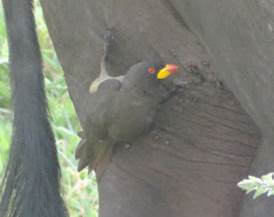 Yellow-billed Oxpecker pecking the tick off a buffalo bull. 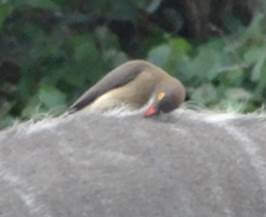 Red-billed Oxpecker combing (scissoring) through the hair on a Nyala bull.

We come now to our best ever sighting of Eland, which was just past the entrance to the S56 (see map on the right).

We had arrived in Shingwedzi just after noon and, once we were settled in our chalet, we decided on a late afternoon drive along the S56, entering via the southern entrance. We turned back onto the H1-7 at the first turn-off. Just before we reached the southern entrance to the S56 again, we were thrilled to see a herd of Eland resting in the long grass on the eastern side of the road. 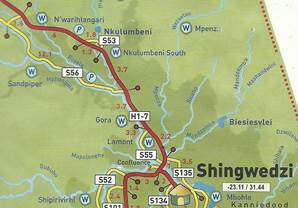 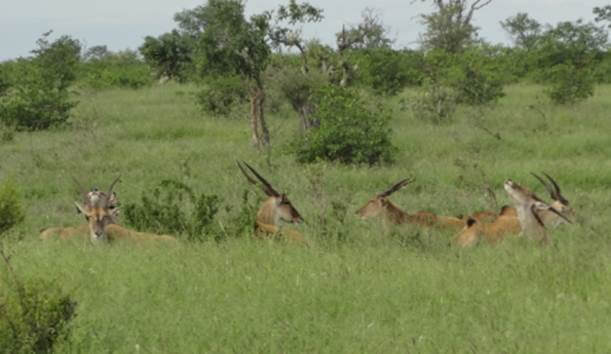 Part of the Eland herd. 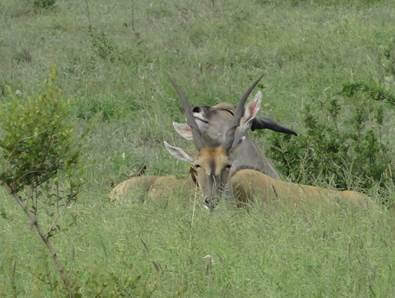 Close-up of two of the group in the photo above.

It was after 5:00 pm already and the light was not that great, but after we had waited a while, their afternoon rest came to an end. One of them, which was lying apart from the others, arose and the others followed suit. They moved off towards the bush with the zebra that had been grazing nearby, giving us a great view of their rear ends! Fortunately for us, they did stop to graze, so we were able to get a few decent shots, before being forced to leave in order to get back to camp before the gates were closed. 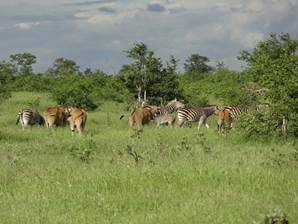 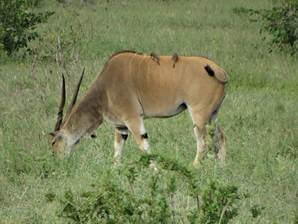 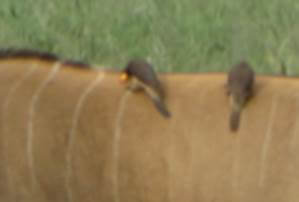 This sighting proved the point that yellow-billed Oxpeckers also feed on antelope. All the oxpeckers were Yellow-billed. (Admittedly, the Eland is the largest of the antelope. And we have seen them on giraffe - again, not exactly a small animal.) You will notice that they were combing (or scissoring). Once again the enlargement is out of focus, but the combing motions can be seen in the bird on the left.

Then, to our great delight, when we came past the same place the following morning on our way to Babalala, what should we see but this same herd and even closer to the road than the previous afternoon! Sadly, however, because it was still early, and overcast, the light was once again not in our favour.

When we viewed these photos on our television monitor, I noticed for the first time that the facial markings on the various Eland were quite different, as can be seen in the photos below. 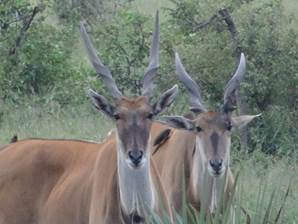 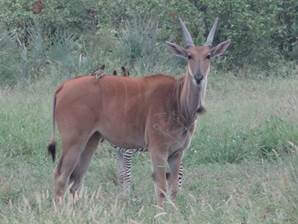 Another antelope we were surprised to see along this route was the Nyala. In our experience they tend to prefer the riverine vegetation. But one morning a group of eight Nyala bulls, of varying size, crossed the road in front of us, heading towards the Nkulumbeni River on the western side of the road. They were too quick for us so most of our photos were either blurred or awkward, but we did manage to get one fairly good shot. 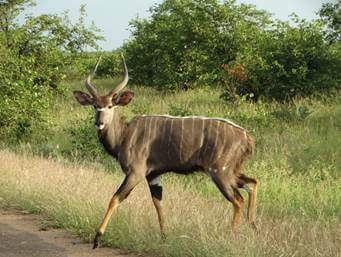 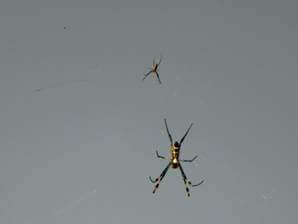 This brings us to the S53, the short loop at the end of the Mphongolo-Nkumbeleni section of the H1-7. We have never seen anything spectacular here, and generally ignore it. One early morning though, we decided to give it a go and got the following interesting shot of a pair of Golden Orb Spiders. The smaller spider is the male and he is waiting patiently for his voracious bride to start feeding before he will attempt to mate. The callous bride thinks nothing of making a meal of the groom!

The Nkulumbeni River forms a shallow gully as it passes under the H1-7 between the northern and southern entrances of the S53. As we have mentioned before it flows into the Boyala just before the Boyala flows into the Mphongolo.

As can be seen in the photo below, when not in spate, it is really no more than a stream. The enlargement is of some of the family of Red-billed Storks that were feeding in the pools of water left by the rains. 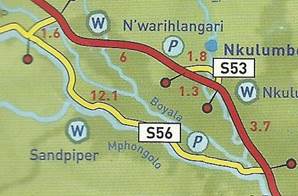 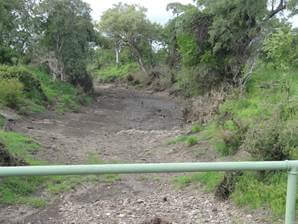 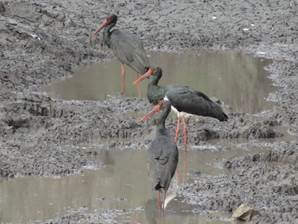 This brings us to the next section of the H1-7.