My childhood holidays were spent on the South African east coast – from Ifafa (just south of Durban) in Kwazulu-Natal down to Witsand at the mouth of the Breede River in the Western Cape, with the Transkei (between Port St Johns and East London, and now part of the Eastern Cape) thrown in for good measure. Those of you familiar with these places might assume that my dad was an avid angler and you would be right. His bucket was for redbait, mudprawns and catfish – definitely not for lists with game parks as items.

I had the good fortune (or mixed blessing) to marry a restless man for whom fishing is a torture devised by sadists. He also loves driving (what’s up with that!) and lives by the credo that travelling through the countryside is what cars were invented for, anyway. So it was not long before a trip to the then eastern Transvaal (now Mpumalanga) took us on a day visit to the Kruger Park.

Our love affair with Kruger had begun.

Curiosity eventually took us north to Shingwedzi and after our very first visit there we knew we had hit our personal jackpot.

Now, to get to Shingwedzi from the south, you have to pass Mopani, but at first we were rather dismissive of the place and only used it as a pitstop on our way to and from Shingwedzi, thinking that the surrounding area, not being watered by any major rivers, would probably not offer much to see.

However, Mopani is within easy reach of Letaba, so our stays at Letaba also introduced us to the Mopani area and we discovered how much we had been missing. We also discovered that, out of season, it is almost as quiet as Shingwedzi. It became, after Shingwedzi, our second favourite Kruger destination.

This series is an exploration of these two areas and we are going to start with Mopani.

Our journey begins where the H1-5 meets the H1-6. (You are going to become very familiar with the H1-6!)

A glance at the lower right-hand corner of the map will show that the H1-5 ends at a crossroad intersection.

To the right is the short turn-off to the Letaba Camp. To the left is the H-9, which takes you to Phalaborwa. Ahead is the beginning of the H1-6.

In this chapter we are going to explore the 20 km (12-13 miles) between Letaba and our first destination, Malopenyana.

The first 5 km of the H1-6 is a very popular stretch of road, and not only because it is so close to the Letaba Camp. The map shows that it runs parallel to the Letaba River, offering excellent views, and if the season and your timing is right, you are likely to have good sightings. 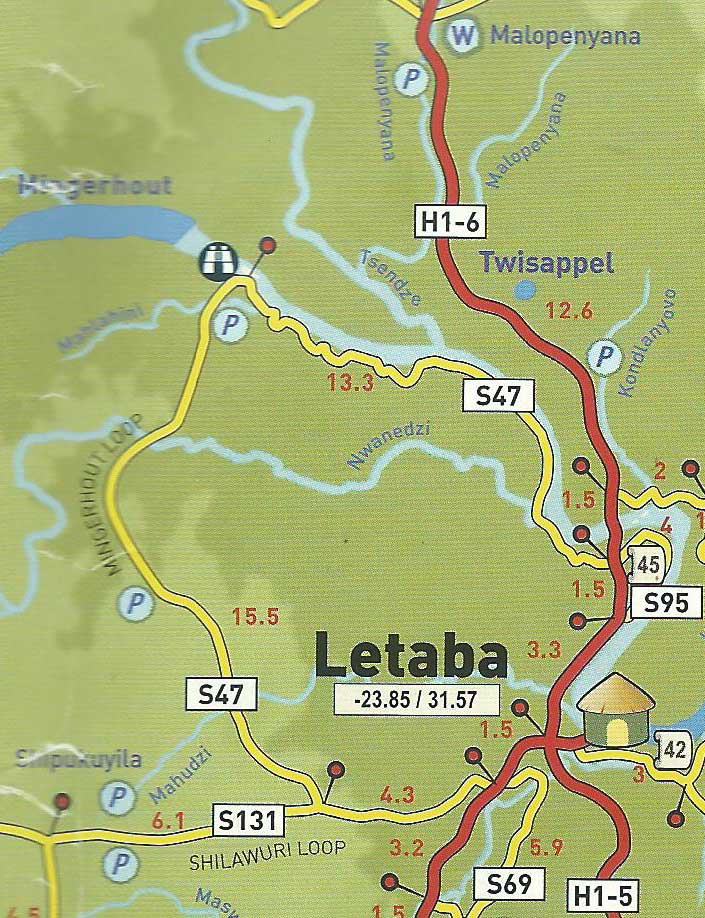 The photo on the right is of a magnificent Kudu bull browsing on a tree right at the edge of the river embankment. There are about 15,000 Kudu in the Park, so you are almost certain to see them. (More about the Kudu much later on.)

The Letaba River can be clearly seen behind the Kudu. Waterbuck and elephants are the animals you are most likely to see on the river bed, with crocodiles and hippos making frequent appearances too. 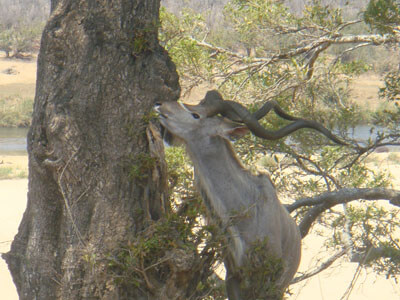 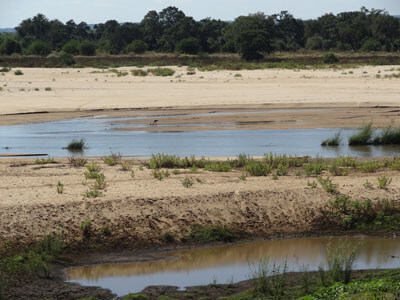 View directly across the river from the road, looking east. Along this stretch the river is flowing southwards to the right. 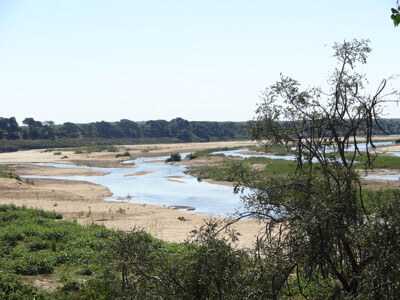 Taken from the same place but looking upstream to the north. You can imagine what a mighty river it becomes when it is in flood! 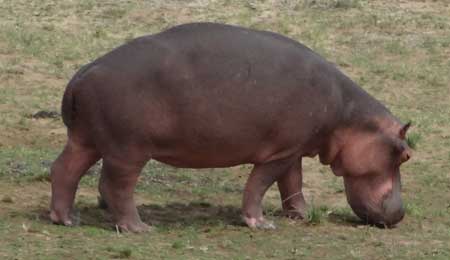 Hippo grazing on a dry part of the river bed.

Saddle-bill Stork fishing in the river.

The left side of the road (looking west) is usually a very dry and bare area, but in January of 2017 it was transformed by the abundant rains.

This was a very large gathering of Marabou Storks. Below are a few close-ups of these birds which always remind me of earnest undertakers. And let’s face facts, folks, only a mother could love a face like that! 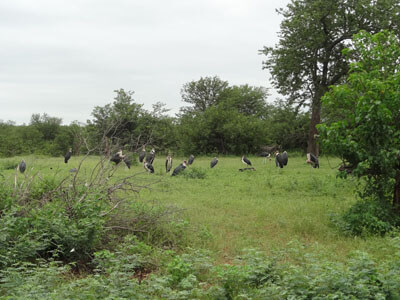 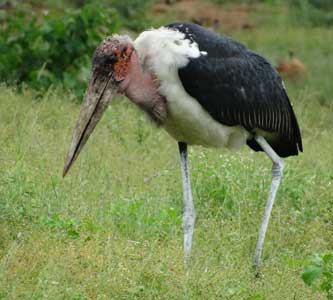 Marabou Storks are carrion eaters, so they are often to be found competing with vultures for the left-overs from lion kills. 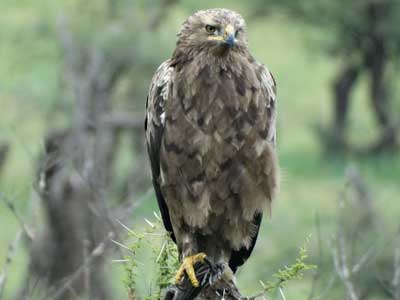 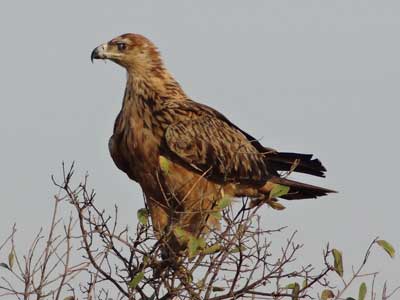 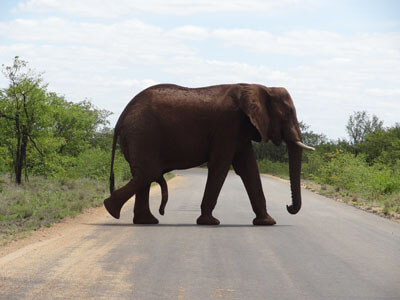 To the left is something you see whenever you find a bull elephant in musth. (Details of the musth will be dealt with much later when we get to Shingwedzi.) This bull was crossing the road to get to the river.

The bob-tailed giraffe below is not an unusual sighting in the Park. We have seen several. You can be almost sure that this giraffe survived an attack by a predator, probably a lion. 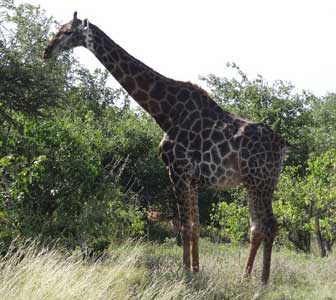 We arrive now on the bridge over the Letaba River, which is flowing from west to east at this point. Here it is possible to stop and alight from your vehicle (at your own risk) in the designated area, which is clearly marked.

In this photo you are looking downstream to the east. In the green strip along the bank is a maternal herd of elephants while in the water there is a pod of hippos. 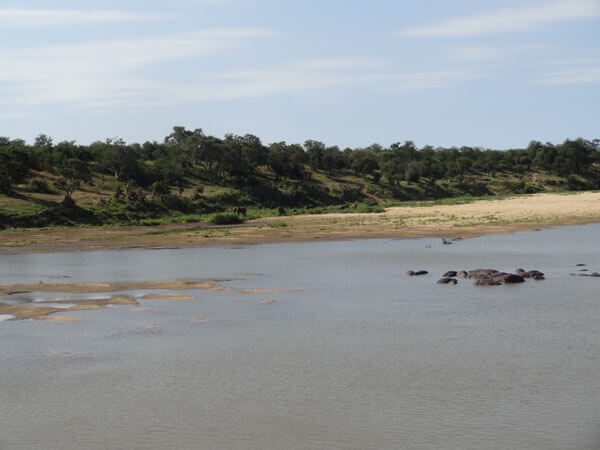 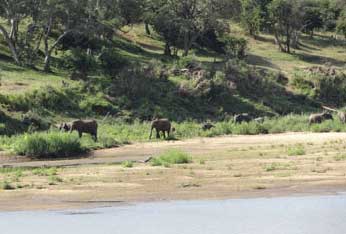 Closer view of the elephants 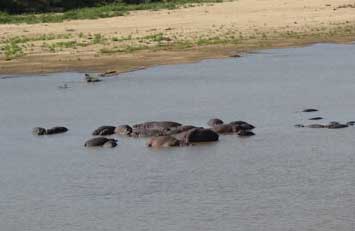 Closer view of the hippos 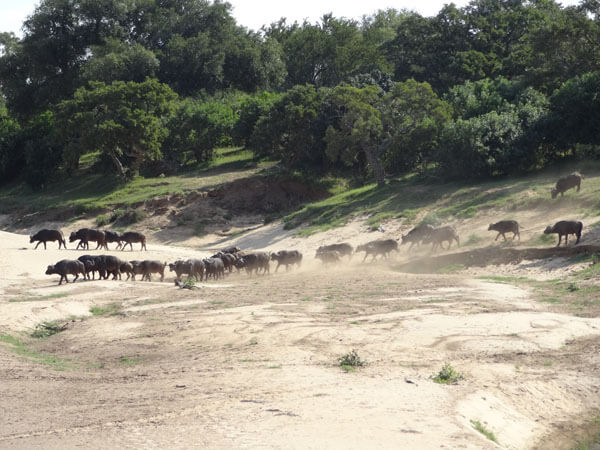 To the left and looking upstream is a fair-sized herd of African Buffalo kicking up a dust cloud as they make their way down to the river to slake their thirst.

This was only the vanguard. When we had crossed the bridge we saw that there were still more making their way through the trees towards the river.

In the bottom left photo, note how the Letaba bends quite sharply again to the north beyond the buffalo. 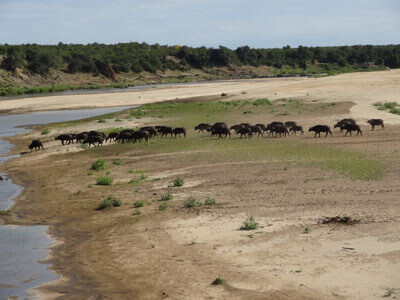 These members of a troop of Chakma Baboons were sitting right on the edge of the road just off the bridge. It was early afternoon and a hot day in May. They were taking a rest from the day’s activities so we got really great photos. Normally they are so active that it is quite frustrating to catch them in good poses.

These two moms both had suckling young ones that were way beyond babyhood! 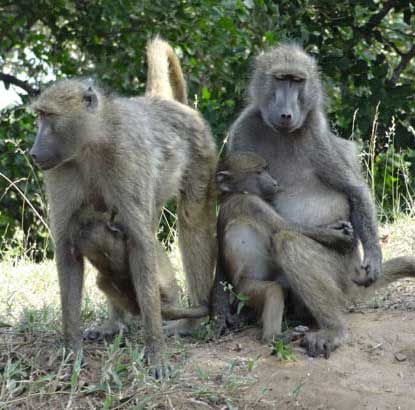 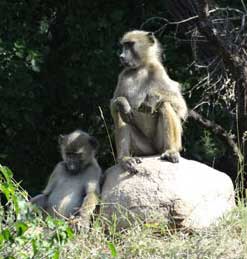 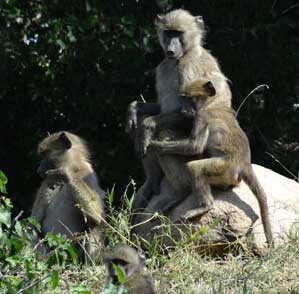 The next five to six kilometres still deliver good sightings as the area is quite well watered, with the Letaba (out of sight and coming from the north) on the western side of the road.

The photo below looks to the east. In the distance lie the Lebombo Mountains, the border between the Park and Mozambique. Calling them mountains does stretch the imagination somewhat, because in reality the Lebombos are a range of hills. The dense tree line in the upper half of the photo marks the course of a small tributary of the Letaba River. Behind the zebras is a line of mopane (pronounced moh-PAH-nee), the most common of the trees found in the northern areas. Where the soil is poor, as in this case, the mopane remains quite stunted and is known as mopane scrub. More fertile soils produce mopane trees which can attain heights of up to 25 meters (about 80 feet)! 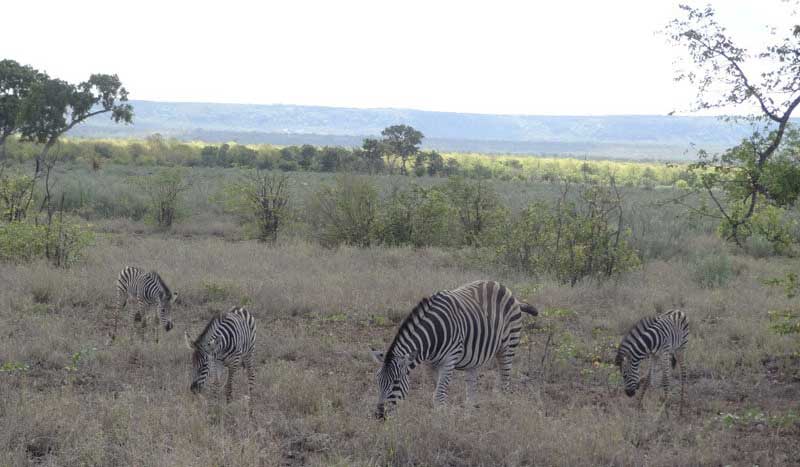 Believe it or not, the photo above was taken at the height of the rainy season, in January. This was in 2016 when the Kruger Park was in the grip of a severe drought, hence the wintry look of the landscape. (The harsh light was not helpful with regard to photography – especially of the amateur kind!) 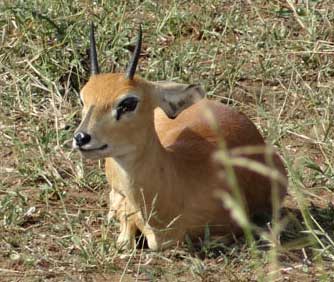 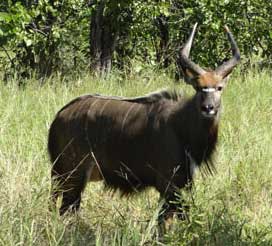 There is one distinctive feature of the southern half of the H1-6 (between Letaba and Mopani) – an unusual, sweet-smelling odour which we have not experienced in any other part of the Park. We are not absolutely sure what it is, but there is a shrub with silvery-green leaves which grows all along this route, and which we have not seen anywhere else, so we have come to the conclusion that it is the source. This mystery shrub can be seen in both the photos below. 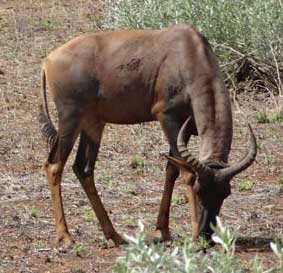 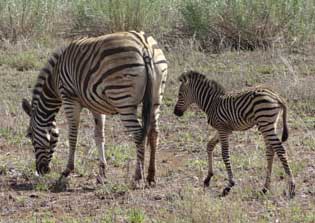 With regard to size, the Kori Bustard, in the photos below, is second only to the ostrich, and is about half its size. It is therefore very easily identifiable. Unlike the ostrich, it apparently can fly powerfully if pursued, but is reluctant to do so. We have certainly never seen one in flight.

Because they love the long grass, it is not always possible to get a full length shot of them, so I have cheated by including a photo which we took near Satara. It was very early in the morning and it stood in the road giving itself a very thorough preening, the first and only time we have seen one do this. 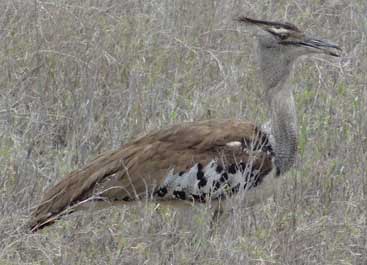 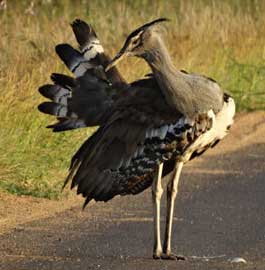 We end this part of our tour with this great shot of one of the Park’s most beautiful eagles – the Martial Eagle. 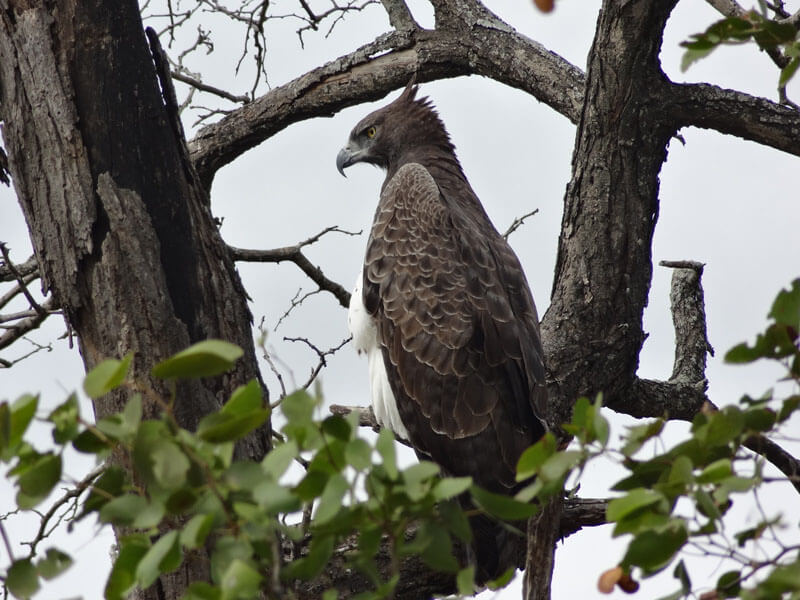 The Letaba turns away to the west and the sightings dry up for the following six or so kilometres, until we reach our next destination – Malopenyana.