With the children all agog, we were in the lounge for our gift-opening ceremony.

This was a ritual from my own childhood. Each person had their own pile of gifts placed under the Christmas tree, and the gift-opening followed a strict procedure – starting with the youngest of the family. Whenever our extended family gathered together, this was a very long process!

But this year, there were only the four of us. 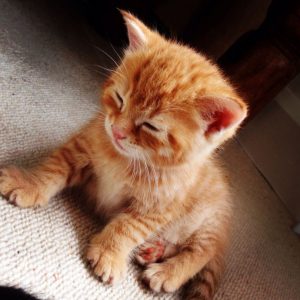 From the public domain – very similar to our Tiger

We had just finished when into the house marched a tiny ginger kitten, and without the least bit of effort, he marched right into my heart – one of the best Christmas gifts I have ever received.

We had no idea where he had come from, all questions to neighbours bearing no fruit at all. But keeping him was not really our decision. He had decided that he liked our house, liked the family, liked the dogs (Mickey, a miniature poodle, Penny, a lab cross and Abby, a cocker spaniel) and this was where he was going to stay.

He was beautifully marked with strongly defined dark and light ginger stripes. And he had the loudest purr I had ever heard. We had no trouble finding a name. He was Tiger. And, like Max, (see Velvet Cat) he followed his humans around with dog-like devotion.

How well I remember walking down our long driveway to the gate to fetch the milk – in those days still available in glass bottles and delivered to your home. I would walk at the head of a cavalcade – Mickey at my heels, followed by Penny and then Abby, and, bringing up the rear, Tiger. Three black dogs and a ginger cat. Morning after morning, without fail. And always in that order.

There was no typically feline restlessness at night either. Tiger happily slept in the pantry with the dogs, and continued to sleep there with Mickey after the banishment of the other two to the garage (which is another story). And during the day, while Penny and Abby did their fence patrol, he (and Mickey) preferred to remain with me.

When he was about six months old, I had him neutered. He had up until then shown no signs of wanderlust, but I didn’t want to take any chances, what with the two vicious bull terriers living next door.

When our neighbours first moved in, they warned me to tell my children not to put their fingers through the fence. I was quite taken aback, because I could not see how I could ensure that a toddler and a pre-schooler would always remember to take that kind of precaution. Fortunately, they had a split-pole fence erected between our two properties, so neither they nor we had to worry about our children’s fingers any longer! 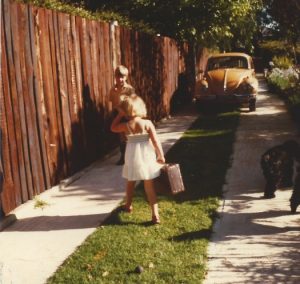 The lower end of the long driveway (with Abby and Mickey on the right) and the split-pole fence.

About a month after Tiger was neutered, builders arrived to add on a fourth bedroom to the house, and things became rather chaotic. Anyone who has been through this will know what I am talking about.

One morning, while the children were at school (Dieter in Grade One and Tasha was in kindergarten), I went off to town, leaving the house, the builders and the animals under the watchful eye of Winnie, our part-time domestic help. Tiger was sitting sunning himself at the garage door, where he usually waited for my return.

I was not gone that long – an hour at the most.

When I returned I found three of the builders in the driveway and they immediately came to me, gesticulating wildly and pouring forth a torrent of Fanagalo.

For those of you who are not familiar with the term, Fanagalo is a pidgin language, loosely based on isiZulu, with English and Afrikaans words, which evolved on the South African goldmines.

I was quite bewildered. Clearly something calamitous had happened, but what?

To my shame, I have to admit that my knowledge of South African indigenous languages is very rudimentary and I could not make out what these clearly distressed men were trying to convey to me.

They were pointing at the corner formed by the garage and the split-pole fence but at first I could see nothing. Then, right in the corner under the fence, I noticed something sticking out.

It was Tiger’s tail!

I dashed for the fence and with a pounding heart I pulled him back through into our yard. His eyes were glassy and bulging and his tongue protruded from between his teeth.

He was quite dead.

Then I understood what the builders had been saying.

Tiger had been sitting next to the fence minding his own business, but like so many cats, he had been careless with his tail. The two bull terriers from next door had got hold of his tail. He had yowled in fear and pain and had tried to dig his claws into the cement surface of the driveway, but to no avail. They yanked him through and strangled him.

I lay over the corpse of my beautiful cat and sobbed, not caring who saw or heard me.

And I have never gotten over my aversion to bull terriers.

(Apologies to all bully lovers. But I really loved that cat.)