Although we had sorted out some of Mimi’s issues fairly easily (see Rescues to the Rescue!) there were two which we struggled to solve.

The first was that she was not properly housetrained.

If the house was open, she went out on her own without a problem but if the doors were closed, she simply took herself off to one of the bathrooms and used the mats. I found this thoroughly exasperating, but had to admit it was easier to deal with than cleaning puddle marks off my carpets.

One day she accompanied me to the bathroom and while I was sitting attending to my own bladder requirements, she calmly squatted on the bathroom mat and relieved herself as though this was what she was supposed to do. I suspect that the old lady she had belonged to had lived in a flat and had actually taught her to use an old bathroom mat.

In an attempt to retrain her, we kept the bathroom doors closed and became more vigilant, taking her out regularly if the entry doors to the house were closed, as they were during inclement weather. This, however, led us to another problem.

She was a perfect example of an over-bred daxie. Not only was her spine unusually long, but her legs were very short, even by daxie standards. She did not like getting her feet wet and even less did she like it when the lawn was not newly cut because then she got her chest and tummy wet too. She would instantly start shivering with cold and stress, and would be unable to respond to either of nature’s calls.

It was extremely frustrating to go out into the cold, misty, rainy conditions so typical of spring and often, even in summer, in the Natal Midlands, and then vainly spend twenty minutes walking around the garden, becoming damp and frozen yourself, and then, when you give up and return inside, find a puddle or a pile on the carpet ten minutes later.

It was Tasha who developed a method which solved the problem.

First you wrapped Mimi in a towel and took her to the bottom of the garden, keeping her warm and snug and stroking her so she was completely relaxed. Then you looked for the driest spot available (usually under a tree) and put her down. Within a few minutes Mimi would do one or the other. Then you rewrapped her in the towel, picked her up, stroked her ears and whispered praise and encouragement into those same ears while walking to another dryish spot. Then you put her down again and within another few minutes she did the other. Then you let her run hell for leather for the kitchen door!

This probably sounds like major pampering but we found it to be the easiest and quickest solution.

Leaving her outside on her own was no solution at all. Unlike Tilly, who raced out, did her thing and then raced back in again, Mimi raced non-stop round the house from the backdoor to the front door to the backdoor, whining pitifully and leaping frantically against the doors, so that by the time you let her in, not only was she in a panting lather, but as soon as she had calmed down she would find a comfortable spot in the house and relieve herself.

The second major problem was that she was absolutely terrified of thunder. This was something new to us. We had always lived in areas where there were regular thunderstorms, with Mhlambanyati in Swaziland and Iswepe being the worst. Yet none of our dogs had ever shown any signs of stress.

Tessie and Poppy were the only ones who wanted to be inside during a thunderstorm, and this only developed after our move to Hermannsburg. They would dash for the kitchen door, scratch madly to be admitted, and then settle down calmly until the storm was over. Their kennel was now in an enclosed area in the outbuildings away from the house, whereas in Iswepe it had been on the kitchen stoep. Whether it was the proximity to the house which had made them feel more secure in Iswepe is anyone’s guess. 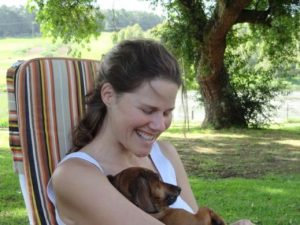 Mimi on the lap of our dog whisperer.

But with Mimi it was sheer naked terror.

Tasha, who was fast becoming our personal dog whisperer, worked on the issue, and did improve matters to the extent that she was no longer a quivering wreck during a thunderstorm, but she still shivered and just wanted to be on a lap until it was all over.

There was only one spot in the house where she felt safe on her own during a thunderstorm and that was inside the back of the couch, the same spot where Tilly liked to hide. If the thunderstorm struck during the night after we had gone to bed, I learnt to simply go and fetch her from the laundry where she would be flinging herself against the door which opened into the kitchen, and then sleep with her in the spare room till it was all over.

Other than these two issues, admittedly fairly troublesome, she gave us no other problems.

One of her peculiarities was that she was the only dog I have ever come across which could not swim. In both Iswepe and especially in Hermannsburg, the two dams played a large role in our dogs’ lives. Admittedly Wolfie did not like swimming, and his doggy paddle was hilarious, but he had still enjoyed being in the water. Pixie had also had a problem initially, but that was completely my own fault as I had carelessly allowed her to fall into the dam when she was a small puppy. I had immediately fished her out, but the experience had traumatised her. However, never fear, our personal dog whisperer sorted it out, and eventually she overcame her fear.

But in Mimi’s case, she was literally unable to swim and would certainly have drowned if she had ever fallen into the water. Tasha tried to teach her, but the moment she was afloat in the water, her spine would twist and she would go under.

Another issue that she had was that, occasionally, when we picked her up, she would scream in anguish. Moments later all would be well. She did not appear to have any injury that we could see.

She had been with us for eight months when all these problems converged.

A very dear friend of mine, whom I have known since the second grade, came to visit us with her daughter. Our children were born pretty much at the same time and were all great childhood friends but it is our two daughters who have maintained a very close friendship.

The first intimation that something strange was going on was that when Cetta (my friend’s daughter) climbed into her bed that night – a spare mattress which we had fetched out of our storeroom – she found it soaked. It looked for all the world as though one of the big dogs had come in with a particularly full bladder and decided that the mattress was an ideal place to empty it.

Fortunately, the bed in the spare room is a double bed, so Cetta slept with her mom, but I was, nevertheless, thoroughly exasperated with Mimi. The weather was fine and the doors had been open. What was the wretched dog’s problem? And why was her bladder so full?

Then on the day after their arrival, Cetta picked Mimi up and she gave her scream of anguish. Cetta was quite distraught as she thought she had somehow damaged her. We were able to reassure her, but we were surprised when Mimi's condition progressively worsened and by the following night she was unable to move without screaming in utter anguish. The only position she was comfortable in was to sit, holding herself up stiffly with her forelegs.

That night I put her into bed with Tilly, but she could not lie down. I got up to check on her several times during the night, and each time she was in exactly the same position, sitting stiffly upright. That poor little dog did not sleep a wink, and when she turned to look at me it was with terrified eyes.

We took her through to the vet first thing the next morning.

I was not surprised to hear that it was a collapsed disc with a very poor prognosis for discovery.

So many things were explained. Her inability to swim and her bladder issues were all a result from living with an unstable disc. This was very clearly a problem she had had for a very long time. I believe that it came from her puppyhood when she was inexpertly picked up by a small child, her extraordinarily long spine rendering her particularly vulnerable to an injury of this nature.

Treatment involved leaving her at the vet for a week to be monitored and nursed, and there was no guarantee that she would recover.

Although it was already March, we were still having late rains and thunderstorms and the thought of Mimi, alone in a strange place during a night-time thunderstorm, was something I could not consider.

Tasha and I stood by, stroking her, while the vet administered the fatal injection.

As her life faded away, her bladder began to empty. The vet placed a towel under her and it just ran and ran and ran. She must have been in agony from her overfull bladder alone, let alone the excruciating pain in her spine.

It was heartbreaking. I had not realised, in the brief time that we had her, how that little dog had crept into my heart. Our only consolation was that we had given her eight months of a very happy life.

When we moved from Hermannsburg six months later, I found the little coat she had worn when we got her – the little black and white striped vest – and it broke my heart afresh. Even now, four years later, as I am writing this, tears have welled up.

I have been through this so many times, as you will know if you have read all the previous chapters, but it never gets any easier. 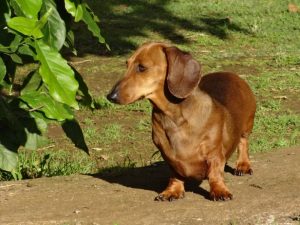