I am taking a break from the Year of the Dog to climb onto a soapbox to tackle a subject I am passionate about.

By now, if you have been a regular reader of this website, you will know that we learnt many lessons during the days of our dogs, especially during the puppy episodes. But before I return to the subject of backyard breeding, I want to address two other important lessons concerning the acquisition of dogs which I had to learn the hard way.

The first lesson was never to buy a dog on impulse.

Our very first dog, our beloved Bambi (see Velvet Cat) had died suddenly at the age of six leaving us with Mickey, our other miniature French poodle. Mickey was not fond of children, our own being no exception, and so we were seriously considering getting a more child-friendly dog. 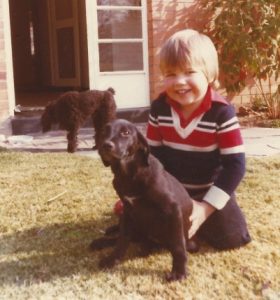 Dieter (4) with Penny (4 months) Mickey in the background

While out shopping one day, I went into a pet shop, and there were four cute puppies of mixed origin. The mother was a Labrador, but all that was known of the father was that he was, as the saying goes, a travelling man. On impulse I bought the black puppy with a white blaze on her chest and brought her home to the children.

Aside from being a very fearful dog, who never got over her terror of strangers, Penny was very sweet and loveable and she adored the children. Unfortunately, she was also very boisterous and, when she grew bigger, knocked them over on a regular basis, to their intense annoyance.

One Monday morning I was standing in the passage sorting dirty laundry into piles when Dieter – then four – came running into the house.

“Penny bit me!” he cried out, highly indignant.

She had followed him inside, and stood wagging her tail, twisting her whole body ingratiatingly to show she bore him no ill will. He turned from me, saw her and then in a fury fell on her, grabbed her tail and sank his little teeth into it!

To Dieter’s further indignation I fell about laughing, while he spat out dog hair. (Penny herself did not seem to have noticed.) 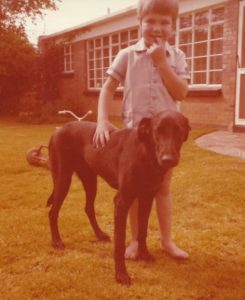 But it was not always amusing. It soon dawned on me that before you get a dog you need to take very careful note of the characteristics of the specific breed – and unfortunately Penny was not a perfect match for our family. She would have been far better suited to a family with older children.

Over the years I have also learnt that high energy dogs which are not regularly exercised will exercise themselves, and this is what Penny did, running up and down the front fence barking madly at all passersby. And on Durban Deep (a gold mine in Roodepoort on the West Rand) there were plenty of those available. Concerned that we would get complaints from our neighbours, besides not enjoying the racket myself, I spent much of my time calling her away from the fence.

Then I made a difficult situation worse and learnt my second lesson.

Do not foster dogs on impulse either!

When Penny was about eighteen months old I took in a black cocker spaniel which was leading a very lonely life because of a change in her family’s circumstances.

Abby was a very good-natured, calm and friendly dog, a little older than Penny, and she fit into the family right away. However, she came with a massive problem, which I had not been aware of and did not have the expertise to fix. She had always been an outside dog and was not house-trained. (Puppies I can train. Adult dogs, not so much!)

At that stage all our dogs slept in the pantry, and morning after morning, we would have to clean up the mess. No matter how late at night we took Abby outside to do her business, in the morning the pantry would bear witness to how well her excretory system was working. (She never once messed in the house during the day, by the way.)

And then, horror of horrors, Penny, who had been perfectly house-trained until then, suddenly started joining Abby in turning the pantry into a very smelly place. We had to banish them both to sleeping in the garage. (Mickey, I am convinced, heaved a huge sigh of relief.)

The change of venue did nothing to stop either of them, and soon, getting to our cars in the mornings became a matter of dodging piles and pools!

Another huge problem was that in a very short space of time after Abby’s arrival, it had been Penny who led Abby astray and I had two dogs racing up and down the fence barking hysterically and incessantly.

After about nine months of enduring this double hell (together with the fact that I was in the middle of a five-year spell of health problems) I reached the conclusion that there was only one solution – I would have to find them both suitable homes.

Here I learnt another of life’s salutary lessons.

There are some very strange people out there, and some of them are magnetically attracted to the word “free”.

I was soon ankle-deep in half-truths. If I had even the faintest negative reaction to the caller (and there were a few), I simply said that we had already found the dog a home. (I did not mention that the home was our own.)

I was lucky enough to find Abby a home quite soon. A man who owned a cocker spaniel and knew and loved the breed phoned. I explained the situation and emphasised that she was not house-trained. He remained interested, so I took Abby to meet him and to have a good look at the home. He thought Abby was very well bred but I received a lecture about having let her get fat, and because she was not properly groomed. Then I was told – in detail – how to groom a spaniel by hand. Eventually I managed to escape – feeling assured that Abby was in good hands.

I phoned a few days later just to check that he had no regrets – and blow me down if he was not offended! He seemed to think that I had regrets and wanted her back!

Finding Penny a home took longer. I had even accepted that she would remain with us when I received a very encouraging call. After a long and very candid chat with the caller – a really decent-sounding and sympathetic man – I followed the same method and took Penny along for a look-see.

The home was fantastic, with teenagers, one of whom immediately took a fancy to Penny, who even – though cautiously – allowed herself to be petted! They also had a completely enclosed garden so there was no see-through fence for Penny to use for barking exercises.

I left even happier than I had been after Abby’s adoption. (Admittedly, the absence of a grooming lesson did help.)

It was only many years later that I realised how very fortunate I had been to find such good homes for them.

I had been completely ignorant of the horrors of dog fighting and did not know that these merciless, inhumane, evil people keep a look out in the classifieds for dogs which are offered free. They use them to fight (if they are aggressive enough) or as bait (if they are not).

In order to protect their fighting dogs from unnecessary injury, they tape up a bait dog’s muzzle so that it cannot defend itself. They even use defenceless little puppies and kittens as bait! There are no curse words bad enough to express what I feel about dog fighters.

NEVER offer a dog free to a good home – unless you are prepared to investigate and inspect that home, and do follow-up checks. It is far better to ask for a payment as this will put off the chancers. If you then find someone suitable you can always refuse to accept the payment. Better still is to take your unwanted animals to a shelter which is set up to do checks on prospective homes. And the same applies if you end up with unwanted puppies as a result of backyard breeding, as I almost did.

It is true that if it is not a non-kill shelter (which are in short supply), the chances of your unwanted animals having to be euthanized are very high. A very good reason indeed for ensuring that you do not add to the dog and cat overpopulation!

The worldwide statistics of stray dogs and cats are horrific. Apparently, each person in the world (how many billions is that?) would have to own seven dogs in order to eliminate the problem. This would mean my household would have to support twenty-eight dogs! I just manage four!

With my short (and eventful) foray into dog breeding, I have come to the conclusion that breeding should be left to the experts – unless you have a definite and certain market. Even then, I feel that no-one should be allowed to breed without a licence, to make absolutely certain that the breeder is not running a puppy mill, the horrors of which, thanks to social media, I’m sure I don’t have to describe.

That said, I do understand and sympathise with people wanting a puppy of a specific breed and then purchasing them from backyard breeders for the simple reason that expert breeders charge an arm and a leg for their puppies. If I had had to buy from recognised breeders, I would never have owned a Rottweiler in my life.

Through bitter experience though, I have realised that this is actually a very short-sighted attitude.

I am now of the opinion that it would have been far better to spend the extra money on a well-bred, disease-free dog than on the high cost of dealing with arthritis, dysplasia and other diseases, as we eventually ended up doing.

Certainly, I can never regret the existence of Wolfie and Tess, who enriched our lives in so many ways, but we spent a pretty penny on relieving their pain, and we could never be sure how effective their medication and health supplements truly were. Animals cannot tell you, and as Rotties have particularly high pain thresholds, it is difficult to judge. We only know that for a good number of years they were never completely pain free.

Therefore, not only will I never breed again myself, but if we ever want another Rottweiler, I will get one from an accredited breeder.

Unless it’s a rescue dog, of course.