Our new garden, while nowhere near as large as the Iswepe property, was still spacious enough for two large dogs, but it was the dam which soon became all the dogs’ favourite place. Not only was it more easily accessible than the Iswepe dam, but the grassy bank and the jetty made it far more user friendly too. 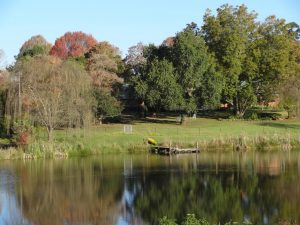 View of our garden and jetty from the north side of the dam.

View of the dam and jetty from the corner of the garden.

To Tilly’s great excitement, a pair of whitethroat swallows frequented the dam. Unfortunately for her, they did not nest in our garden, so the amount of swooping over the lawn and the grassy bank was limited, which thoroughly frustrated her. The swallows spent most of their time on the dam itself, and frequently perched either on one of the jetty piles or on a depth measurement pipe which was planted in the dam across from our jetty. Tilly would run up and down the limited length of the jetty, only occasionally dashing onto the grassy bank, so she missed out on the exercise which the Iswepe whitethroats had provided. 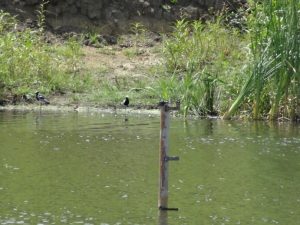 The pipe with a family of whitethroats. The water level is very low. On the far bank is a blacksmith plover (lapwing). 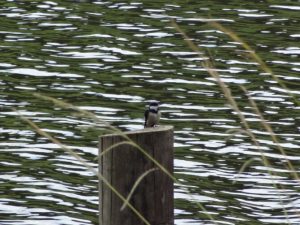 One of the whitethroats at the jetty. 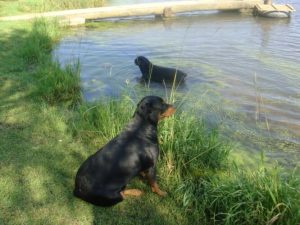 Tess in the water and Poppy on the bank.

Poppy, however, got excellent exercise.

While Tess was happy just to walk into the dam and occasionally lie in the shallows, Poppy was already a devoted swimmer (see The End of an Era), and she needed no encouragement.

Everytime she spied those swallows she would plunge into the dam and spend as much as an hour swimming to and fro as they skimmed over the water. We would, in fact, have to call her to come out. She clearly intended to continue all day.

A few months after moving in, just as the first signs of spring appeared, we noticed a pair of smallish fish (approximately 20 cm in length) which spawned near the jetty. Whenever we came onto the jetty, they would come to the surface and stare at us with what we assumed was benign curiosity.

One afternoon Tasha sat on the edge of the jetty and let her hand dangle in the cool water. Suddenly she let out a scream of pain and consternation. One finger had four tiny pin-prick droplets of blood! Those fish were not so benign after all. In fact, they defended their eggs with piranha-like ferocity. So much so, that when Tasha went for a swim, they bit her legs and abdomen, and she was forced to enter the dam several metres away from the jetty, where the dam was inconveniently deep and her progress was also greatly impeded by reeds. She feels that it needs to be stated that being hounded by a pair of stupid little fish was most humiliating!

As for Poppy, they chased her clean out of the dam!

Only after the cloud of eggs had hatched and the minute babies had grown a bit did those protective parents relax their vigilance and Tasha and Poppy could once again swim in peace.

Tasha added paddling in our two-seater canoe around the perimeter of the dam to her regular exercise routine, and it was not long before Tilly joined in these expeditions.

Tasha would be at the back with Tilly on the front seat when they set off. However, to keep a beady eye on all the herons, cranes, ducks, geese, cormorants, darters, moorhens and crakes, she soon moved onto the bow. With her ears blowing back in the breeze and her tail wagging furiously, this trip was the highlight of her day. (Just in case she fell in, Tasha had Tilly on her leash and hooked it around her ankle so that she could easily and quickly haul her back into the canoe, if necessary.)

Walking round the dam was another highlight. The route started at the village entrance on the south side and followed farm roads. All three loved these outings, but for Tilly it was once again a serious birding expedition, with doves and plovers providing excellent chasing sport. 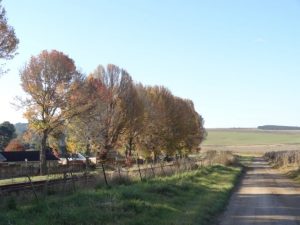 The farm road south of the village. 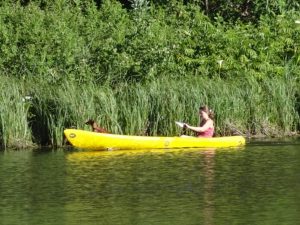 Soon, however, all birds were supplanted by the biggest prize of them all – a Burchell’s coucal, which soon became known to the family as the Tilly-bird. (It was actually a pair. Coucals are extremely devoted and never far from each other.) 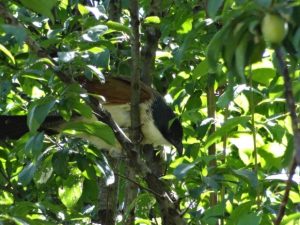 The Tilly-bird in a tree just over the fence in our neighbour’s yard.

The only place I had ever seen a Burchell’s coucal before was in the Kruger Park. This bird, also known as the rain-bird (it is most vocal in the spring and before a rainstorm) is one of the most distinctive sounds of Africa. Its song is a bubbling ‘do-do-do’, and I was thrilled to the core the first time I heard it at dawn one morning during our first spring in Hermannsburg.

And it was nesting right in our garden!

Because it is bigger than the average garden bird (but not large enough to be as intimidating as the hadedas), with long, wide-spread tail feathers, and because it spends a fair amount of time on the ground, it soon came to Tilly’s attention. For any self-respecting hunting dog it is irresistible and from the moment she saw it, it became her life’s ambition to catch it. Tasha declared that Tilly obviously wanted its head (and that provocative tail!) mounted on the wall above her bed as a trophy of victory!

The Tilly-bird built its nest in an overgrown yellow jasmine bush along the fence on one side of the garden. With ruthless determination that silly daxie climbed up into that bush, trampled the nest, and there she stayed. Her zeal had carried her up but she was quite unable to climb down. And here it was that Tasha found her stranded, a full one and a half metres from the ground! How long she had been there was anyone’s guess. Tasha hauled her out – no easy task thanks to the fact that the silly dog was in amongst very dense and tightly packed branches.

The Tilly-bird then moved house. It built its nest on the opposite side of the garden in a hawthorn hedge which Tilly was unable to get to because the hedge had been planted outside the fence.

However, it also spent time in the garden in an ancient mulberry tree which grew nearby.

One never-to-be-forgotten day, Tasha was amused to see Tilly trying to climb the mulberry tree. As there was no way she could get up there (or so she thought), she paid no further attention. Much later, she wondered where Tilly was and went looking for her. She was astounded to find her up in the mulberry tree way beyond her reach.

Tilly had no intention of coming down and did not even turn her head. She knew that sooner or later that bird would come within her reach and she dare not take her eye off the spot! Tasha tried to climb the tree and the long sloping branch where Tilly was waiting, but in vain. She called Barry but Tilly was well above his reach too.

The branch sloped steeply and she would not be able to move down even a short distance without slipping. There was only one thing to do. Barry hurriedly fetched the ladder and duly brought her down.

Suffice it to say that Tilly did not give up her quest, but it turned out to be a forlorn one. She never caught the Tilly-bird. 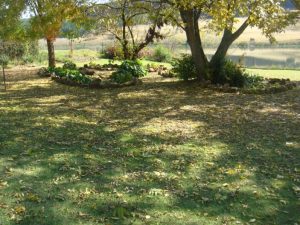 The mulberry tree (centre back) in autumn. The branch Tilly climbed is the sloping branch on the right. 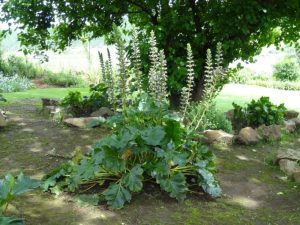 The mulberry tree in summer.

As always, I got a tremendous amount of pleasure out of bird watching and with my new digital camera (the kind where you aim and click) managed to build up quite a collection of photos. A pair of Black Sunbirds and a pair of Double-collared Sunbirds were my favourite subjects. They haunted the red hot pokers growing against the back wall in full view of my kitchen window. 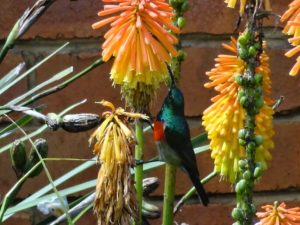 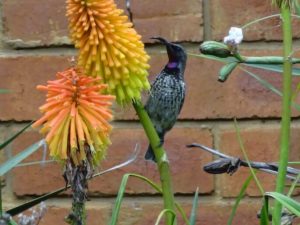 Our resident hadeda pair nested in an old tree at the bottom of the front garden and one year a lightning strike took down about a third of the tree exposing their nesting site to view. Using binoculars I was able to monitor the nesting and incubation from my bedroom window. It was so interesting to see how these large birds took shifts with the incubation and how devotedly they cared for the fledglings. 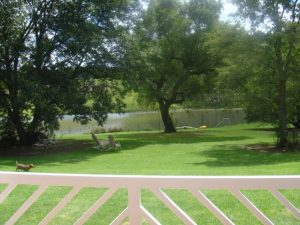 Taken from the verandah. The hadeda tree is in the centre. On the left is the pecan tree.

A flock of about fifteen breeding pairs of masked weavers had arrived while the hadedas were still refurbishing their nest, and decided that the enormous old pecan tree growing near the hadeda tree would be a good site to nest. Soon they were stripping foliage not only from the pecan tree but also the branches above the hadeda nest. This exposed the nest to sunlight and on very hot days I became concerned about the poor little chicks of which there were three, hatched out at different times, so they were not the same size.

One day, to my consternation, I noticed that the littlest one had disappeared. I could not fathom what had happened to it.

I assume it was the yellow-billed kite which often soared above the dam and village. Unfortunately, the hot sun was not the only danger the nest had been exposed to by the weavers.

Despite the regular presence of the kite, the eldest chick survived and it was not too long before he was striding along our lawn with his parents.

After another storm with violent winds broke off even more of this tree, the hadedas did not return to nest there again.

As much as I had grown to love Iswepe, the lushly green and tranquil rural scenery of Hermannsburg, with its beautiful trees and the abundant birdlife (and astonishing array of butterflies!) made this the most beautiful place we ever lived in – to the general agreement of friends and extended family alike – and if it had been possible, I would have been happy to remain there forever. 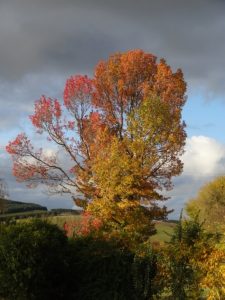 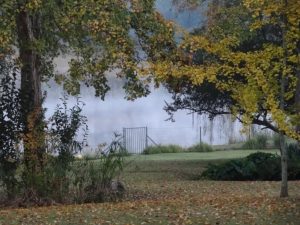 Autumn idyll. The view above is taken on a misty morning. The stunning tree on the left was outside our garden. It can be seen from the other side in the last photo of the previous story, Moving On.