For about two weeks before the weekend of my parents’ Golden Wedding anniversary, Lulu had begun to spend a lot of time under the hedge at the back, where she had scooped out several nesting spots. She was by now also enormously pregnant and it looked very much as though she had held to the first mating.

As we were only to be away overnight, we left them with a supply of food, confident that they would survive without us for thirty-six hours. However, I really wanted to be there for the delivery, just in case there were complications, so it was with some reluctance that I left home.

On Sunday, the 6th February, we had an early lunch and set off for home.  With Lulu and her puppies very much on our mind, we spent time guessing how many puppies Lulu would have. Barry’s guess was six, Tasha settled on seven, and I felt in my bones that it would be eight.

We were all wrong.

To my growing consternation, the closer we came to home the more it rained, but by the time we reached Iswepe it had eased off to a drizzle.

When we arrived home Wolf and Purdey were there to greet us but there was no sign of Lulu. Barry went to the hedge where she had been nesting and was back in minutes.

“There are a LOT of puppies!” was all he would say. (So much for douches, folks! ) (See The Day Lulu Barked.)

We fetched a box from the kitchen and then went to rescue our babies from the weather.

Lulu lay in a hollow under the hedge, her body cradling the tiniest, blackest, shiniest little puppies. She had done a wonderful job of keeping them dry, but she was absolutely exhausted and could barely raise her head to greet us. She didn’t even protest when we took them away and placed them in the box. 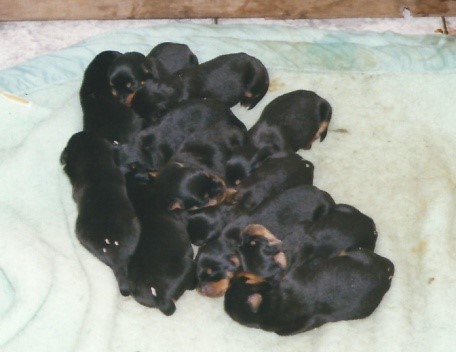 There were twelve puppies, six males and six females!

We placed a blanket on the kitchen floor, got Lulu to lie on it and then placed the puppies with her. She promptly fell asleep. When I came into the kitchen a while later to check up on them all, she had just delivered the afterbirth.

By Tuesday, we noticed that one of the puppies was not being fed enough, so Barry made a trip to the vet to get a milk supplement and a feeding bottle.

And the nightmare began.

Nine of the puppies were a healthy size but two little males and one little female were very small. The larger of the two smallest males could be easily found amongst the other puppies because he was very dark and his eyebrow markings could hardly be distinguished. Tasha dubbed him “Little Man” and the name stuck. He was definitely having difficulty suckling so we fed him with a dropper. The little bottle which had come with the milk supplement was useless and a total waste of  R54.

That night we began with four hourly supplement feeds. I set my alarm for two and went and fed those which seemed to be hungry. I was quite shattered the next morning, but by the second night began to cope a bit better. (Babies are for spring and summer chickens – not for the autumn variety!)

The tiniest male was also the runt of the litter and we noticed that he was very often to one side. I wondered if he was suckling at all. He seemed to do nothing but sleep, so we named him Sleepy Jem after my nephew, who slept through an earthquake in Welkom and refused to believe it had taken place! So we fed Sleepy Jem with the dropper too. He was so thin and so cold I feared for his life.

In the meanwhile we had also acquired two baby bottles and we managed to get some of the puppies to drink from them. In order to help us sort out which puppies had been supplemented we marked them with dots of paint just above their tails. The boys were marked with white and green paint and the girls with pink and lilac.

The biggest puppy was a greedy little girl. She had one pink dot and we named her Lotta, for obvious reasons. The second biggest was also a girl. She was marked with two pink dots and because she had a tiny white flash on her chest, we named her White Spot. 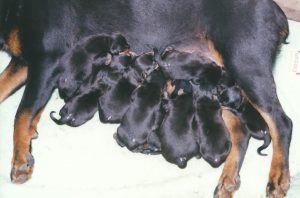 All the while the weather was an ever-present menace. It rained and rained. The entire Great Escarpment area was included and there were places to the north of us where 500 ml was recorded in a 24 hour period. (This caused the flooding in the Kruger Park which is remembered to this day. In various places throughout the Park, you will find the flood level marked with beacons and dated 25th February 2000.)

I desperately wanted to get the blanket washed, as it had begun to smell, and Lulu was not so fragrant either. She was in desperate need of a bath as she was still full of mud and muck.

On Thursday morning I took her outside in the rain, tied her to a pole of the washing line and shampooed her lower half. I had to sacrifice another blanket so I could wash the other one. (In the light of what was to come, and with the wisdom of hindsight, I should have never used blankets at all. Newspapers would have been far better. You live and you learn.)

Gradually, the tension began to mount.

My dishwasher chose this time to break down. Yes, Murphy had arrived with his law.

Barry had constructed a wooden pen from four planks which we placed over the blanket. This prevented the puppies from wriggling their way to all corners of the kitchen as they were surprisingly mobile. On Thursday afternoon, after a visit outside, Lulu got back into the pen with the puppies. As she lay down I heard a muffled squeak. I went to check up and counted the puppies. There were eleven. I quickly counted again. Definitely only eleven. WHERE WAS NUMBER TWELVE? Frantically I lifted Lulu and there lay one of the bigger female pups, quite limp and with its little tongue hanging out.

I grabbed that puppy and frantically massaged its chest, squeezing the little ribcage and willing it to breathe. BREATHE, PUPPY, BREATHE!

Suddenly its tiny chest heaved as it began to breathe again!

When I was sure it was alive and well, I put it back at an available teat and it immediately began to suckle.

I went over to my microwave (it was a convenient height), lay over it and BAWLED! (Just as well I never contemplated emergency medicine as a career.)

The trauma, however, had scarcely begun.