Some four years after the events related in The Christmas Cat, we arrived in Boksburg petless, for the first time in eleven years.

The sole survivor after the departure of Tiger, Penny and Abby (Penny and Abby’s story will be related later), Mickey had developed a cancerous growth on his anus. Surgery did not solve the problem as it came back, this time aggressively, and soon there was a big, ugly, open ulcer, which grew rapidly.

It was not long before we had to say goodbye to the little dog who had been my loyal companion for ten years. (It was the first time that I had had to make such a decision and I felt like a murderer.) 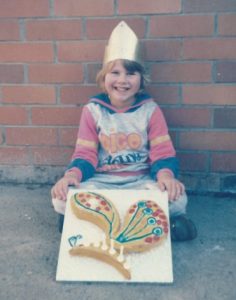 The big move to Boksburg took place on Tasha’s sixth birthday, so aside from getting the desired butterfly cake, she did not exactly have much of a celebration. Looking for a way to make up for this, I decided to surprise her with a kitten. In fact, I would get two so that both children would have their own pet.

When we were still in Roodepoort, I had seen a stunning tortoiseshell cat at our church and had then and there decided that I would love to have one. I contacted the Boksburg SPCA and asked them to reserve us two tortoiseshell kittens.

Just a few days later I received a call to inform me that they had the kittens. I left the children at home and went off to fetch their Big Surprise.

One kitten was mainly black with ginger highlights and biscuit coloured paws. Although not as beautifully marked as the cat that had inspired my choice, she was a true tortoiseshell.

The other one was very different. She was a white cat with very distinct black and ginger patches. One of the black patches was over one eye, which gave her a slightly lop-sided look. Much later we discovered that she was actually a calico cat.

Off I went with the two kittens safely secured by the SPCA lady inside a woven orange sack. They let me know, in no uncertain terms, that they were not happy with this form of transportation. Fortunately for my eardrums, the trip was short.

For Natasha it was a match made in heaven. 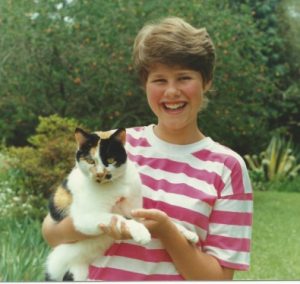 As it had been her birthday she got first choice. She snatched up the calico kitten and the relationship was sealed from that very moment. They spent the afternoon getting to know each other and it was quite remarkable how the kitten responded immediately to her name. She followed Tasha wherever she went.

And this never changed. For almost twenty-one years, Ginger was her adored and adoring companion – a gentle, laid-back cat with a phlegmatic attitude towards life, and who loved nothing more than being cuddled and snuggled.

Her sister Katy was much more assertive, and though very sociable, did not submit to being fondled or carried around. And woe betide anyone who tried to snuggle under blankets with her! Every now and again Tasha would try but was always treated to menacing growls and hostile hisses for her pains.

Katy and Dieter did not really take to each other and she soon adopted Barry as her human. Her favourite spot was behind his head on the back of his armchair, where she purred contentedly. 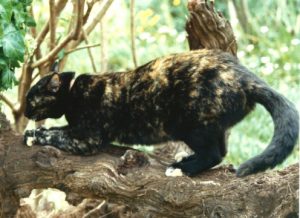 Katy (7) at her favourite scratch tree.

The two kittens turned out to be very agile and adventurous.

We went out one afternoon and left them secured in the kitchen. We left one small, upper window open. As it was very high up, we were sure it was safe. It wasn’t. On our return we were horrified to find both tiny kittens outside the house! How they reached that window boggled our minds and we were careful not to repeat the mistake.

It was not long before I found out how they had done it. A few days later, Ginger, still a minute little thing, jumped up (with one bound and with the greatest of ease) onto the stove and learnt her first painful lesson. It was quite a while before her poor little blistered paws healed. Fortunately, she was a fast learner and never repeated her mistake.

One of the conditions of kitten adoption laid down by the SPCA is that spaying is compulsory, so at six months I took them in. There it was discovered that Katy (the sneaky thing!) was already in the very early stages of pregnancy and had to have a full hysterectomy. Then we understood the reason for the caterwauling which had disturbed our sleep one night some time back!

To show her disapproval of having been prevented from adding her contribution to the explosion of the cat population, she pulled out her stitches.

Mad dash back to the vet to get her intestines back where they belonged!

To prevent a repeat performance she was forced to wear the humiliating Cone of Shame.

However, we were not done with feline pregnancies.

After only a year in Boksburg, Barry decided to leave the gold-mining industry for the pulp and paper industry and we moved to Ngodwana.

Anyone travelling from Gauteng to Nelspruit and who chooses the beautiful Eland River Valley route will know when they have reached Ngodwana. It stinks! Essence of rotten cabbage mixed with elixir of pit toilet. It takes some getting used to, I tell you.

Ngodwana Village is situated on the side of a hill rising away from the factory. It is quite possible to go right past it without seeing it as efforts have been made to preserve the natural vegetation which is thick bushveld. (Besides the fact that one’s attention is distracted by the huge factory on the opposite side of the national road, and the awful stench which creeps into your car through the air vents and threatens to asphyxiate you.)

On our arrival in our new home, we kept the cats locked up in one of the bathrooms for a few days to make sure they became oriented to their surroundings. We let them out as soon as all the furniture and furnishings were in place and they settled in immediately.

There was no fence between our yard and our neighbours’ to the left of us and on the morning after our move I met the dog from next door. Now I say “dog” because in shape she did resemble one, but as I came around the corner of our house and met her face to face (literally!) I nearly had a heart attack. I have never seen such a large dog – before or since. She was enormous. Of mixed ancestry but clearly a Great Dane was there somewhere in the mix. Maybe a bit of deerhound and Irish wolfhound as well... And possibly some horse...

But my surge of adrenaline had been for nothing. This was Jody, who wouldn’t harm a fly.

She and the cats generally ignored each other.

Then, one afternoon, Tasha and I saw an amazing sight.

We were standing in the driveway, and from the far side of the house Jody burst onto the scene, her long hind legs practically whistling past her ears as she frantically made for the safety of her home. In hot pursuit came Ginger the Placid, now transformed into Ginger the Fury.

It was a ludicrous sight, for even with all her hair bristling, her tail bushed out and erect, she was a fraction of Jody’s size!

What on earth had Jody done to effect this astounding personality change?

A few days later Tasha came to me clutching Ginger and looking a little concerned. Ginger’s teats were very swollen, and would I take a look? I gave one of the swellings a squeeze and a jet of milk just missed my eye!

It was kitty hormones!

Either it was a case of a decidedly cantankerous phantom pregnancy; or poor Jody had, all unsuspecting, wandered into the vicinity of the invisible kittens.

Within a few weeks all symptoms disappeared and Ginger became her placid self once again and we never had a repeat performance.

Jody, however, did not resume her visits to our garden.